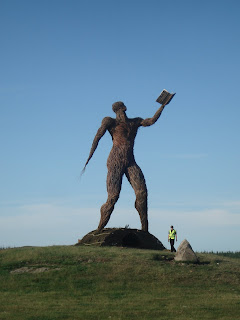 A rather different type of outdoor activity this weekend. To celebrate the occasion of Mearnsey Boy’s stag doo we journeyed to sunny Dumfries-shire to enjoy the Wickerman Festival. The famed southwest microclimate didn’t disappoint, dispensing bright sunshine from a blue sky.
I was most impressed by the festival itself. It was a good size, yet it was never uncomfortably busy. We were not jostled or pushed, nobody spilled any drinks on us, there were no fights or disagreements. I think one of the things that made the crowd so agreeable was a distinct lack of those in the 20 – 30 age group.

Perhaps they were discouraged from attending by the lineup, which didn’t look particularly inspiring on paper. In the flesh however it was a different matter – the festival exceeded all my expectations. The Saturday evening kicked off with Candi Staton, the woman who, with the Source, recorded the first piece of electronic music that I ever enjoyed, ‘You got the love’. At the time I was a died in the wool rocker and couldn’t admit that I liked it, not even to myself. Now, a quite incredible 23 years later, I had no qualms about throwing my hands up in the air as instructed. 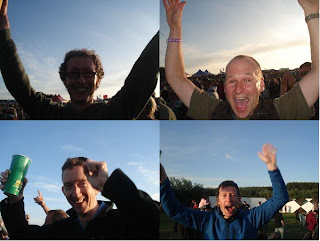 Sometimes I feel like throwing my hands up in the air….

At the perimeter of the arena a large sign proclaimed the presence of a urinal. This was the most civilised urinal I had ever seen – you simply urinated through the fence into the thicket beyond. On my second visit I noticed that I had been mistaken. The urinal sign was actually the wall of a urinal enclosure. As I watched, a reveler even more confused than I by the toilet etiquette let rip on the exterior of the hoardings, hosing down the feet and legs of those who had actually taken the trouble to use the facilities properly. 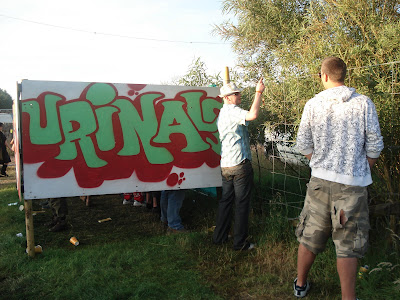 An easy mistake to make
Next up was Dreadzone, an act that I hadn’t previously heard of. Their best work was a delightful fusion of reggae and techno with a thumping bass. At times a slightly rocky undertone crept in completing the holy trinity – all the best elements of Linton Kwesi Johnson, Slam and AC/DC rolled into one. The effect was one of revelation. I knew immediately that this was the music that I had been searching for, that my life up to that point had been no more than a prelude to my discovery of Dreadzone. 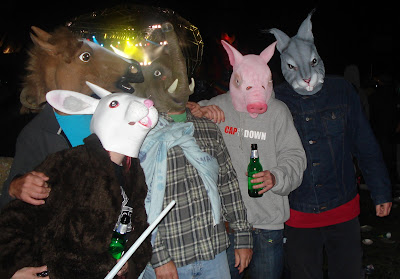 I find the rabbit on the right rather disturbing
The Wickerman stood atop a knoll to the left of the stage, holding aloft a book. I am told that it was an effigy of Rabbie Burns but I could not make out his trademark sideburns from my viewpoint. He was burned, to an accompaniment of fireworks, around midnight, after which we retired to the dance music tents. 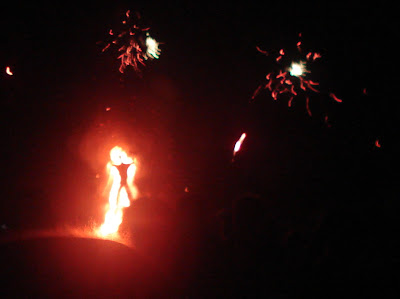 The Wickerman burns
Morning brought a stiff wind and driving rain, decimating the campsite. When we rose round midday a scene of absolute devastation. awaited. Empty beer cans rattled past. Abandoned tents slumped in every direction, their sodden flaps fluttering in the wind. On occasion whole tents cartwheeled past, racing with other festival debris – inflatable sofas, sleeping mats and carrier bags – to the perimeter fence. Most were trapped against the wire but one plucky tent vaulted the fence and became lodged atop a caravan. I thought what a waste of the world’s resources it is to manufacture such low quality tents. Not only the oil and aluminium, also the lives of the Chinese factory workers who assemble these shoddy tents in satanic oriental sweatshops, working long hours for low pay, living miserable, homesick existences in the farflung dormitories of vile industrial cities where pollution hides the sun. 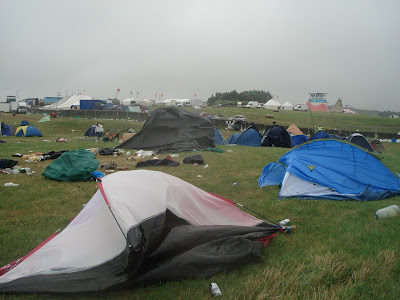 Morning devastation
We surveyed the pile of cans in the centre of our disassembled camp, then cast our eyes over the litter strewn site. To remove a few dozen cans would make no difference whatsoever. Shamefacedly we skulked off to the carpark, feeling sullied by having lowered ourselves to an act of littering. I imagined the wind whipping a plume of litter from the festival site out over the surrounding countryside – perhaps sufficiently large that it may be visible from outer space.
Not one of our party had to subject themselves to the ordeal of the festival toilet, that vile game of Jenga where, rather than placing a his wooden stick on a swaying tower, the player has to balance a log atop a teetering mound of Mister Whippy. I was not to escape unscathed, for at Hamilton services a huge toly awaited me, peeping from within a tangled nest of twin-ply. No attempt had been made to flush it away. I knew ahead of us on the road was a carload of my associates, each incubating a foul brown cargo. This bore all the hallmarks of their handiwork.