Posted by Gavin on Aug 3, 2009 in Bothy, West Highlands | 2 Comments
There is something wonderfully subversive about drinking in the great outdoors, free from the roving eyes of CCTV cameras and the influence of authority figures. When you strip away the commercialism and regulation of city fleshpots – the queues, the curfews, the dress codes, the cover charges – all that remains is a raw, primal drinking experience. Now I enjoy a night round the campfire as much as the next man, but for the long nights of winter, or for wet and midgey summer evenings, the bothy hearth provides the best focal point for banter and storytelling. Of all the outdoor activities I indulge in, bothying is probably my favourite. 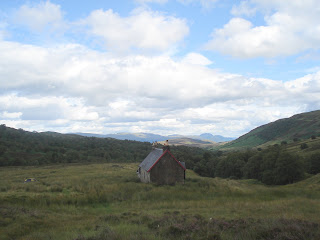 A bothy
For the uninitiated, a bothy is a basic cottage in a remote location, often originally built as a croft, or to house a shepherd or a stalker. They are maintained as open shelters for the benefit of hillgoers. The bothy system is unique to the UK, having arisen as a consequence of two facets of our culture. Firstly, our feudal system of land ownership means that the upland in the UK is generally owned by sporting estates. Secondly there is – in Scotland at least – a tradition of free access to the hills. Formerly, the needs of estates and hillgoers were very similar – before the days of bulldozed tracks and all terrain vehicles, those wishing to shoot or fish were obliged to travel on foot, either their own or those of a pony. Consequently accommodation was required in the farflung corners of the estates. Bothies were provided for this purpose. As technology advanced and fitness declined through the 20th century, it became easier for shooting clients to repair back to the comfort of a lodge after their day’s sport. Many estates felt disinclined to continue incurring the expense of maintaining bothies. In stepped the Mountain Bothies Association (MBA), a member-funded, charitable organisation that today co-ordinates a network of volunteers who maintain bothies throughout the UK. The buildings themselves remain the property of the estates on whose ground they stand. Not all bothies are under the control of the MBA, many are still maintained by estates for the benefit of their staff and are generously left open for the use of other passing hillgoers.
Each bothy has its own character but all are basic. The more luxurious examples may have a couple of rooms downstairs with a hearth in each and further wood-paneled sleeping accommodation upstairs. A more basic example may be a single damp, fireless room with a floor of stone or earth. Some are truly awful – one particular example that sticks in my mind had plaster crumbling from the walls, a pile of piss-soaked mattresses in the corner and a stinking bucket in which floated the bloated corpses of two drowned mice. 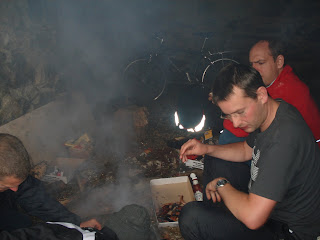 A scene of third world squalor, barbequeing meat in the chimneyless wood shed.
Running water is provided in the form of a burn outside. The toilet is, in all but a few exceptional cases, a spade. The etiquette is that when the brown dog starts to bark, one should retreat an appropriate distance from the building, excavate a square of turf and then unleash the snarling brute like a ferret down a rabbit hole.
Because of the variable standard of the accommodation, bothying is not for everyone. Additionally, getting to a bothy is often an adventure in its own right. I have spent many a dark night stumbling through bog and burn, hauling a heavy pack laden with coal, food and beer. Even some pretty ardent outdoor enthusiasts balk at the prospect of subjecting themselves to long marches and enduring a night without their luxuries.
A common question that I am asked is what one would do if, after arriving at a remote bothy, one found it already occupied by undesirable types. The answer is that you simply take your chance and get on with it. You cannot book a bothy and everyone has an equal right to be there. However, a tolerance of, if not actually an enthusiasm for, hardship and squalid living conditions are prerequisites for the enjoyment of a bothy weekend. It is therefore usually a pretty safe bet that bothies will either be unoccupied, or else occupied by agreeably eccentric characters. Indeed I have only shared bothies on a handful of occasions, having the run of them is a more usual outcome.
Last weekend was my stag doo and as a lover of the bothy life I decided to host the occasion in a carefully selected, little known and out of the way bothy. I felt confident that at most I would find a couple of elderly gents in woolly jumpers, smoking pipes and sucking on their beards. The reality could not have been more different. When we arrived around 2200 hrs we were greeted by the chatter of excited children. A family group consisting of three adults and half a dozen children between the ages of six and ten had ensconced themselves in one of the rooms. As we chatted it became clear that we were both planning to stay for two nights. This was a potentially troublesome scenario all round. Noisy children aren’t high on my wish list of bothy attractions, but I think most people would prefer to be gatecrashed by a few youths rather than a roaring, drunken mob. 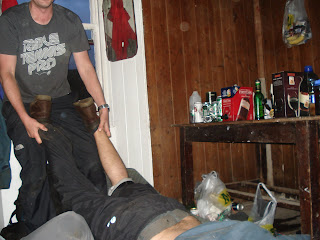 I’ll say you’ve had enough. A reveller is dragged to his tent after getting slightly out of hand.
Fortunately the layout of the bothy made it easy for two parties to coexist without disturbing one another. Many of my party had brought along tents which eased the pressure on the floorspace in our part of the building. It is perhaps not surprising to find that people who were prepared to take a group of small children to a bothy to be both laid back and tolerant. Acceptance of the bothy ethic by both parties meant that good relations were maintained throughout.
We are at the age now where many of us have young children, so it will not be long before the boot is on the other foot. I hope that in years to come, when my own family bothy trip is invaded by a brigade of beer-swilling buffoons, I can repay the friendly tolerance we experienced last weekend by accepting the situation with good grace.