A local skitour for local people

Posted by Gavin on Aug 17, 2009 in East Highlands, Ski | 4 Comments
The middle of August marks a turning point in the year: the days become shorter; the ending of the school holidays congests the roads; people resume their constant droning about football after the summer ceasefire. About this time my mind begins to wander towards the coming winter and the sporting opportunities it may present. 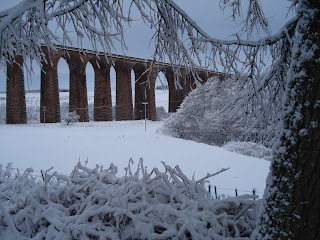 Last winter I enjoyed a truly local adventure, a circular skitour beginning and ending at my front door, taking in the great area of moorland bounded by the River Nairn to the north, the Findhorn to the south, and the A9 to the west.
In the comfort of my living room I tightened my ski boots, shouldered my pack, then cast my skis out the front door onto the garden path. The time was just before eight and the streetlights still glowed orange. My skis slid easily on the fresh snow. I crossed the main road to gain access to the expanse of fields leading down to the sheer sandstone arches of the Nairn viaduct. The orange walls stood out thanks to their steepness, shedding the snow rather than allowing it to accumulate. The river was a ribbon of black, chugging slowly beneath the snow arched branches of the alders, its edges blurred and squeezed by sponges of slush, slow to melt in the chilly water, the current close to the banks insufficiently strong to sweep them seaward.
Past Clava House I cut over a field, once again in the shadow of the great arches of the viaduct. Casting my eyes backwards I was delighted by the twin trenches snaking behind me. The low sun lent them depth, the only features in this carpet of white. I affixed my climbing skins and set off up through the larchwoods. The woods were still and calm, a great silence having descended along with the snow. Animal tracks became commonplace, birds, roe deer and hares. The fine powder had the appearance of having been dusted straight from the sky, like icing sugar onto a mince pie, but here among the tall trunks of the larch the half-coated trunks revealed the direction from which it had come. The mass of accumulated snow had caused several boughs to shear from their parent trees onto the track. I negotiated my way round them, eager to escape the confines of the forest and break out onto the wide open moorland beyond. 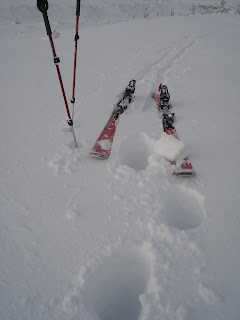 Pylons carried crackling power cables above my head as I struck out onto ever deepening snow. The full extent of the snow cover became apparent, in front of me stretched a panorama of white, Saddle Hill to the left, Beinn Bhuidhe Beag and the distant heights of Beinn Bhuidhe Mor in front.
Huge erratic boulders are much in evidence in the straths, but are conspicuous by their absence here on the moor. Save for the small granite crags that cap the southern flanks of Saddle Hill, these hills are primarily composed of sandy gravel, the plateau having presumably been beyond the reach of the great glaciers that flowed from the coires of the Monadhliath down the straths during the last ice age. A few wizened Scots pines grace the steep banks of the burns which radiate out like the spokes of a wheel. Recent, sympathetic, planting of young trees mean that in future a small revival of Caledonian forest will be nurtured on these slopes. Twisted remnants of bogwood hint at what may be their eventual fate. 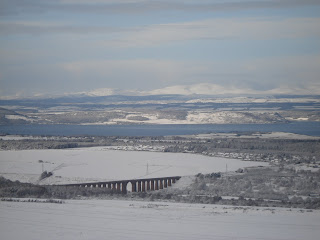 I admired the panorama that presented itself across the deep blue waters of the firth to the north: the great hulk of Ben Wyvis and the jumble of the Fannichs rising beyond the Kessock Bridge; the pointy peaks of the Strathconon Corbetts; the long, triple-summitted ridge of Beinn a’ Bha’ach Ard that guards the entrance to the long lonely reaches of Strathfarrar; a glimpse of one of the Affric hills peeping above the Scandanavian forests of Abriachan.
While these distant peaks drew the eye, it was the rounded hills to the south, the ones that were actually within striking distance, that captured my imagination. The snow had been settled slightly by the wind and my skis sank less deeply into it. I eyed what I now suspected to be tremendous fields of firm packed snow extending into the wild, committing terrain to the southeast of Beinn Bhuidhe Mor, the high plateau beyond Carn Dubh Mor containing the Graham, Carn nan Tri-tighearnan. As it had taken me well over two hours to make it this far, such an itinerary would have to wait for another day, perhaps on lightweight Nordic touring kit.
The city of Inverness and the jumble of houses at Culloden Moor were still in view. In the still conditions I could hear a plane taxiing at the airport. So close to civilisation and yet, up here on the snowfields, in a different world. 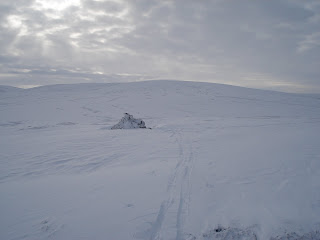 I crossed the tracks of a fox, laid out in a straight line as if the animal was walking a tightrope. Periodically he had paused to excavate small holes, perhaps hunting for mice below the snow in the same way that a polar bear would for seals below the ice. Grouse appeared as black sentries silhouetted against the snow. They strutted indecisively backwards and forwards, both feet and wingtips tracing their progress on the white canvas.
A sandwich and the dregs of my flask sustained me on Beinn Bhuidhe Beag’s 460 m summit as I rested my legs in preparation for the descent down its steep northern flanks. There was a boundary fence to negotiate but the snowcover was sufficiently deep that I was able to slide over the top wire without stopping. Deep powder awaited and inspired me on this delightful but all too short descent. Euphoric, I reaffixed my climbing skins in the depths of this normally boggy hollow and decided to pick my way up through the dwarf pines onto the west ridge of Saddle Hill. 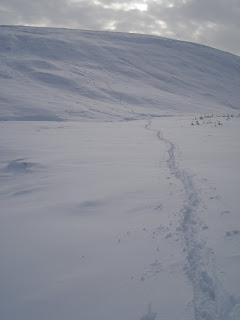 The sinking sun coloured the sky a deep azure as I made my way across the flat fields to home. My legs were weary after seven hours on ski but my heart was light, an ambition had been achieved. I had seized what, in the uncertain and changing climate of the future, may turn out to have been a once in a lifetime opportunity.
We live in an age of lists. Our shops are full of coffee table books of one hundred things to do before we turn thirty, or before we die. All too often these are commercially based activities in far flung countries: jet boats and bungee jumps in New Zealand; hot air balloon rides over the Serengeti at dawn; rafting the Zambesi. Our worship of these exotic dreams implicitly devalues those which are more local or commonplace. In truth the ordinary may be extraordinary, and if we search deeply enough each one of us will find our own dreams lurking. Many of them will be local, attainable, affordable and doubly satisfying because of the creative spark needed to visualise them in the first place.