The summit plateau may be infested with banana peel, but an even greater hazard plagues the area surrounding the Ben Nevis North Face car park at Torlundy and the approach up the Allt a’Mhuillin; they are practically paved with excrement. 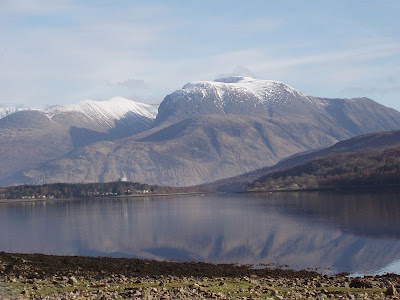 Ben Nevis reflected in the calm waters of Loch Eil (February 2007)
The John Muir Trust announced this week that as many as 1,000 banana skins may be found on the summit plateau of Ben Nevis. The trust are not concerned that hillgoers may slip and tumble to their deaths; they are more worried about the environmental impact, claiming that the peel may take up to two years to degrade.

The specific issue of banana skins has been debated hotly on winterhighland.info.  Ukclimbing.com also has a more general thread about the issue of littering on Ben Nevis. Both have touched on the related topic of inconsiderate defecation in the hills in general and on Ben Nevis in particular. 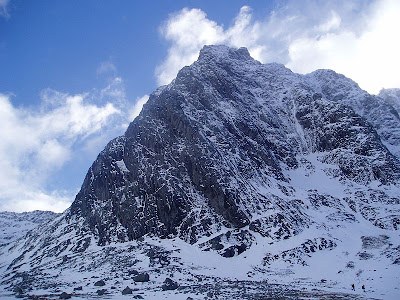 As Scotland’s highest mountain, Ben Nevis has some of the most reliable winter climbing conditions and as such it attracts more climbers than any other. Most weekends between December and April will see literally hundreds arrive early at Torlundy to set out for a day’s sport. It is this early start combined with caffeine, pre-climb nerves and a complete absence of toilet facilities that lead so many to indulge in inconsiderate al fresco bowel evacuations. 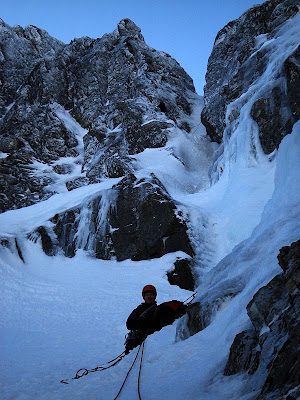 I am keen to see a waterless composting toilet installed at Torlundy, having had the pleasure of using such toilets while walking Tasmania’s Overland Track. Recently I spotted what I took to be a similar facility in Scotland at Abriachan (I took a photo of Abriachan, but not the actual toilet). These toilets are engineering marvels and deserve to be more popular. A solar powered fan draws air down the pan to aid the composting process and this also results in a significant reduction in olfactory impact. 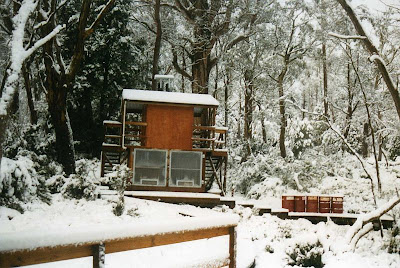 Sadly, the provision of a composting toilet would not rein in the behaviour those who willfully seek to contaminate the outdoors. I don’t think that many people would deliberately allow the brown dog to scratch and gnaw at the door until they had carried their foul cargo into the countryside, however, it would not surprise me if, having been caught unawares, some people try to exhibit, rather than conceal, their output. I am sure that we have all seen the results of this type of behaviour in public toilets – shit on the floor beside the pan or smeared up the walls. The perverted minority reponsible for such depraved acts are sure to be represented among hillgoers – for example there was a thread some time back on ukclimbing.com about a jobby right in the middle of the Ben Nevis path and I have seen one in the Glencoe carpark with my own eyes.

Now I enjoy an outdoor dump every bit as much as an indoor one, often more. I keep one of those military-style folding shovels in my van so I can ensure that any unexpected brown visitors are given a decent burial.