Posted by Gavin on Oct 27, 2009 in Northwest Highlands, Science | 8 Comments
Might Siberian rats help explain cultural differences between Scotland and the USA? This thought occurred to me as I hunkered down on the slopes of Beinn Bheag, one of the two small hills that are prominent in the view down Loch a’Bhraoin from the A832 past Braemore Junction. 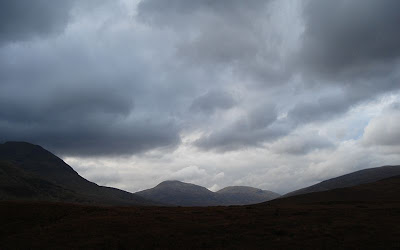 The Grahams Groban and Beinn Bheag, flanked by the Munro A’Chailleach (left) and  the Corbett Creag Rainich (right)
As we squatted on the yellowed autumnal hillside, our backs to the driving rain, it seemed amazing to think that this area had once been populated, that families had lived and worked in the glen’s now ruined crofthouses. Perhaps the ground was drier, more fertile and more welcoming in the relatively recent past. Or maybe the lack of any alternative compelled the hardy inhabitants to endure a hungry and miserable existence until the prospect of a new start lured them onto boats bound for the New World?

I read recently of experiments carried out by scientists in Siberia (New Scientist 2728). As part of a 30 year study into aggression in animals they made parallel lines of timid and ferocious rats from the same original stock. They did this by selectively breeding from the more docile and feistier animals in each generation. This fascinating piece of work shows that behavioural traits may be enhanced by means of natural selection over relatively short time periods. 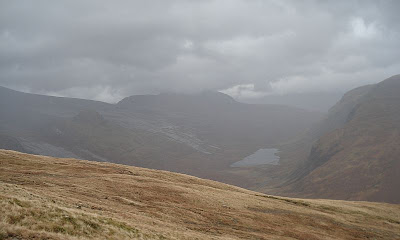 The unusual low angled quartzite slabs of Sgurr Ban and Loch an Nid viewed from near the summit of Beinn Bheag. These Munros had been the original target for the day but windy conditions and a lowering cloud base made the lower hills more appealling.
One could argue that, thanks to successive waves of mass emigration, an experiment similar to that conducted on the Siberian rats has been running in Scotland since the 17th century. While some of our diaspora left unwillingly as a result of forced evictions, the vast majority left Scotland willingly, eager to take control of their destinies, to escape from scraping a living on ground rented from feudal overlords. By these means perhaps as many as a dozen generations have been partially depleted of those more adventurous souls who chose to take the gamble of emigrating in search of a better life.
The question I pose is this – what personality traits may have been amplified as those who remained bred with one another? Might the dourness and stoicism for which the Scottish people are renowned be partially explained in terms of natural selection?If you agree with (or object to) any of these ramblings do leave a comment below.