A little project for the long winter nights

Posted by Gavin on Nov 4, 2009 in Uncategorized | 6 Comments
It always feels good to get off your arse and get something done, especially if it’s been on the list for a while. Addressing my woeful lack of knowledge of how the landforms around me were formed is one such task that I have procrastinated over. Since school geography classes I have dabbled in the odd bit of geology; I have bought books on the subject and either skimmed them or left them substantially unread. I have read exhibits and signs without really taking them in. I have enjoyed watching documentaries but retained very little information from them. In doing so I have lodged a fair number of geological and geomorphological facts in my brain but have not made much progress in developing the framework of understanding required to connect them. 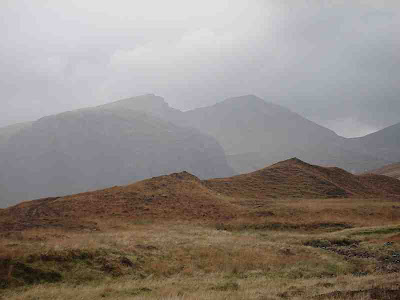 This is the type of thing I’m on about – the mounds in the foregrounds are morianes of some sort, soil and stone deposited by a glacier, where was the glacier? How thick was it? So many questions. Picture of Mullach Coire Mhic Fhearchair and Sgurr Ban, taken on this trip
I’ve been getting to know my brain for a while now and have realised that in order to learn anything I need two things. Firstly, a fairly pressing need for the knowledge and secondly a specific and manageable question to answer.
The manageable question has been forming over the last couple of years as I have explored Strathnairn, the area local to my house on the outskirts of Inverness. There are a number of erratic boulders – large rocks carried by glacial ice and deposited far from where they started out – some of sufficient size to be of interest to boulderers, others near the Culloden Battlefield are of historical interest. Charred remnants appear each April on this Cumberland Stone, presumably present day Jacobites celebrate the anniversary of the battle by burning an effigy of the English Commander on the stone that bears his name. What piqued my curiosity was that these boulders were to be found mostly on low lying ground, the high moorland above contains no such erratics. The rocks are clearly of a type of conglomerate that is found on the south side of Loch Ness, so it was reasonably clear where these erratics had come from. I began to develop a mental picture of the flow of ice.
But the picture didn’t add up and I knew that somewhere out there must be an actual map of ice flow at various time periods. So that was satisfied the first precondition for effective learning, the manageable question – what did the area look like when it was being glaciated? Where were these rivers of ice and how thick were they?
The second precondition, the pressing need to learn, came in the form of an idea for a book. I’ve sketched an outline for a book which will explore connections between landscape and identity. What do you mean by that, I hear you ask. Well I think I know what I mean, but I think it needs a book to explain it properly. In order to write one of the chapters I have in mind I need to develop an understanding of how the Scotland that I see now differs from that seen by the first hunter gatherers that colonised the country after the last ice age and how the vegetation, climate and landforms of Scotland have changed over the last 12,000 years or so. The sensible place to start seemed to be at home. I needed to get hold of that ice flow map.
Thus fortified with a need to learn and a simple question I embarked on a quest for knowledge. Scotland has been subjected to successive waves of glaciation. Since each successive wave obliterates the landscape formed by the previous wave, I needed only to consider the last glaciation event to have affected this area – the Devensian period which occurred between 22,000 and 13,000 years ago. Around 11,000 years ago the climate cooled once more and the glaciers marched again in a short-lived period known as the Loch Lomond re-advance, but as this occurred only in the West Highlands my local investigation can ignore it for now. 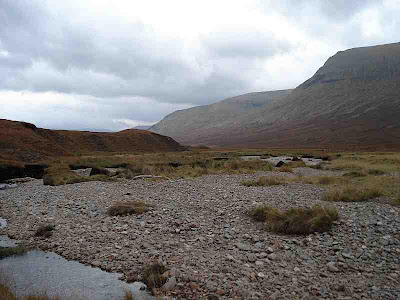 I think the feature on the left is a terminal moraine from the Loch Lomond Re-advance. The glacier would have been pushing this earth in front of it, and when it the glacier melted the moraine was left behind. The hill on the right is A’Chailleach (Fannichs) 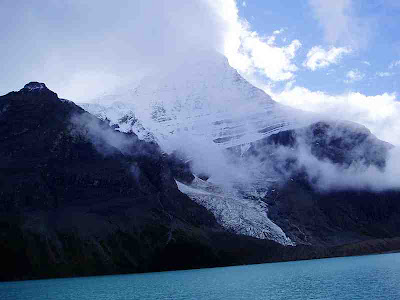 Much less imagination is required to interpret the landscape when glaciation is still in progress. A terminal moraine in Berg Lake below Mt Robson, Canadian Rockies.
I found a link with a handy Glacial Map of Britain which shows the main glacial features. The map has been drawn to represent the ice coverage at the height of the Devensian period, when only the highest peaks in the northwest (shown in red on the map) poked through the ice sheet like the nunatuks of present day Greenland. The most exciting aspect of this map is that it confirmed that I am lucky enough to live in one of the richest areas of the UK for glacially created landforms. Indeed, almost very ripple in the landscape is featured on the map as a meltwater channel or similar. A bit more digging around on the web provided me with a paper with detailed maps showing how the Devensian ice sheet receded in the Moray Firth , creating landforms as it did so.
I intend to familiarise myself with these landforms and the forces that created them over the winter months. As I do so I will crimp out a blog or two on the topic. My previous attempts to swot up on geology have been hindered by a lack of accessible material from which to learn; the facts that I have been hunting have been  hidden behind obscure language and excessive detail. I hope to make my intermittent musings on the topic accessible, well illustrated and maybe even entertaining. I hope you’ll join me for the journey and chastise me if I start to retreat behind inpenetrable geological jargon.

Leave a Reply to Colin L