Posted by Gavin on Nov 8, 2009 in Uncategorized | 3 Comments
I really should pay more attention to the Hello magazines that people leave in the coffee room at work. I came within a few feet of Take That star Mark Owen’s wedding cortege this afternoon but didn’t realise it until later, when I read about his wedding in a dogeared copy of the Highland News while I was waiting for the Magic Wok to whip me up a Kung Po Chicken. 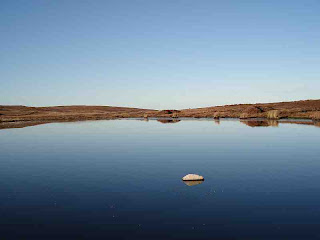 Still water in an artificial pond passed en route to Carn Maol. The pond makers had also taken the trouble to build a row of Butts in order to maximise their chances of blasting any ducks unlucky enough to stop by for a swim.
A cavalcade of six or so Range Rovers containing men in evening wear swept past me as I returned to my van after a quite family stroll on the moorland above Cawdor. There was clearly something going on when we passed through the village half an hour or so later; a herd of long lenses were corralled opposite the church; men in fluorescent jackets milled about, self-importantly directing the passing traffic. In short, all the trappings of a showbiz extravaganza were present in this usually quiet highland village. Apart, that is, from hordes of screaming teenage girls. Or indeed hordes of any description. 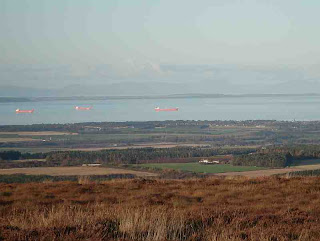 View from Carn Maol over the Moray Firth. This small hill of 324 m makes a fine viewpoint. The Cairngorms are visible to the south; to the west a panorama unfolds from the Affric hills northwards to Caithness.
I don’t mean to play down the occasion. Most of the parking spaces in the village were occupied. There were even three cars parked by the pig field a quarter of a mile along the road.
I have been constantly plagued by celebrity in the great outdoors this year. Perhaps I exaggerate slightly, but I did share the bar in the Tongue Hotel with Paxman back in April. At least I managed to recognise him without any assistance from a chow mein stained tabloid.

Perhaps this unusual topic will bring my blog to a new audience, I might get thousands of hits from Take That fans overnight.