Posted by Gavin on Nov 30, 2009 in East Highlands, Landscape | 4 Comments
On Saturday I began my quest to develop my understanding of the landscape by taking a stroll round the coast of the Black Isle from Kilmuir to Munlochy. This is a prime area for raised beaches, formed when the relative sea level was higher than it is at present. The walk also provided an opportunity to test out the GPS on my phone. The image below was created using a combination of the Instamapper phone app and Google Earth. I’m very impressed with the result. I appreciate that this is a touch on the geeky side but the geekiness probably pales into insignificance when compared with keeping a blog and spending Saturday afternoons examining raised beaches. 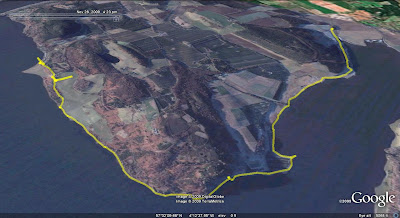 View towards the Kessock Bridge from the shoreline east of Kilmuir.  Ord Hill is  in cloud towards the centre 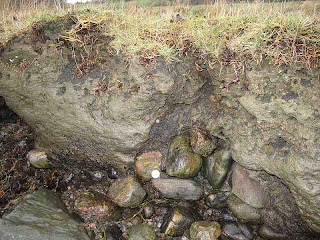 I’m not going to go on about raised shorelines, you can read the link above if you’re sufficiently interested. Suffice to say that when the relative sea level was higher, this eroded bank of silty soil was  a  tidal mud flat very much like the one in the photograph of Munlochy Bay below 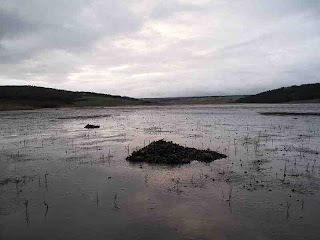 Mud flats in Munlochy bay
As we returned to the car park at the end of our walk great skeins of geese filled the sky. Thousands of individual birds, fat after long days of grazing in the high Arctic summer; literally tonnes of   goose meat on the wing. The formation rippled as they changed course in response to my camera’s flash, as if it had emanated from the muzzle of a gun. 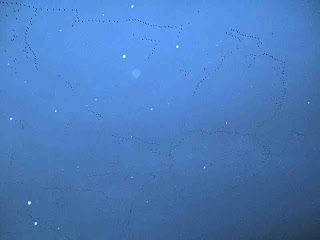 A sky full of geese and a few raindrops on the lens.
Geese aren’t the only ones migrating – I’m toying with the idea of migrating this blog over to WordPress but it’s all a bit daunting and I’m not sure I’ve got the mental strength needed to see the job through at present! If you’ve done similar yourself and have any tips to share (or want to talk me out of it) please get in touch.