Posted by Gavin on Nov 17, 2009 in Bothy, Norway | 10 Comments
Thanks for your comments on last week’s bothy post. I have spent the week mulling over the dilemma that the promotion of outdoor activities poses for antisocial types like myself. Having given the matter some more thought I think that I can see why the Mountain Bothies Association (MBA) have chosed to publish the locations of the bothies that they maintain. They have presumably realised that in this information age it is inevitable that the locations will be revealed. By doing so through their own website they at least have an opportunity to educate people in bothy etiquette before they arrive.
Giving people an appreciation of the great outdoors and and an understanding of how to behave once you get there can only be a good thing. You only have to compare Scotland with our near neighbour Norway for an illustration of how ignorant our general population are in the ways of the wild. In Norway it is perfectly normal to be an outdoor enthusiast whereas in Scotland we are regarded as slightly freakish extremists. There are many factors that contribute to this difference in attitude: the Norwegian population is less concentrated in the urban centres; Norway has a similar population but roughly four times the land mass, giving them more outdoors to enjoy; they have no history of access being discouraged by the owners of sporting estates. Possibly most importantly, however, is that their outdoors are made accessible by the Norwegian trekking association, the DNT, who maintain a network of marked trails and mountain huts throughout the country. 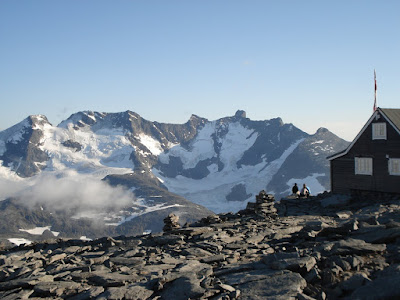 This fully serviced DNT hut is right on the summit of Fannaraken (2068 m) in the Hurrungane region of Jotunheimen National Park. View towards the peaks of Skagastolindane.
Many DNT huts are actually more like hotels and this can be rather offputting for the hardship-seeking purist like myself. They also have a range of less luxurious accommodation options, ranging from unserviced open hovels, in which one can doss free of charge, to serviced but unmanned huts that operate on an honesty box system where for a small fee one can avail oneself of gas, firewood, crockery, bedding and sometimes even tinned food and recycling facilities. 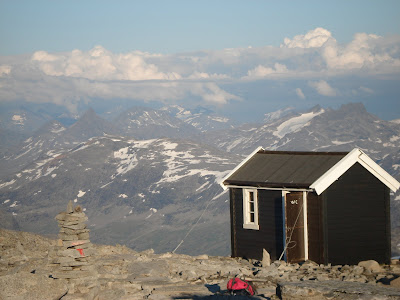 One of the best views I’ve ever had from a toilet (Fannaraken Hut)
From reading bothy books I have established that it is a common fantasy among tired outdoorsmen, fighting their way through bogs in the rain, that they may find their bothy crowded with a Norweigan University netball team, wet and cold and in need of a good towelling down. I have never heard of this dream coming true in a Scottish bothy, but I once came close in an unserviced Norwegian hut in the Jotunheimen National Park. The hut was a former saeter – a summer dairy equivalent to a sheiling. It was a lovely old wooden building which boasted a very low entrance, the purpose of which was to facilitate the smoking of cheeses in the rafters. 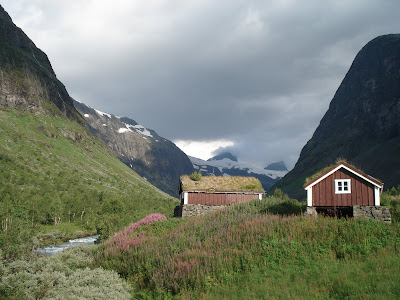 This is more like it. The partially serviced Stolsmardalen hut in Jotunheimen NP.
As we were settling down after dinner a pair of lycra-clad lady students entered, stooping low to get through the diminutive doorway.  The watchful eye of my wife, who was pregnant at the time, helped me to keep any towelling urges in check.
It is difficult to imagine an such an honesty box based system of serviced huts working in Scotland, but this may be something of a chicken and egg situation. To sustain such an infrastructure requires a nation of outdoor enthusiasts, but perhaps to nurture a nation of outdoor enthusiasts requires precisely such an infrastructure. In publicising bothy locations the MBA may have unwittingly taken a first, faltering step towards the development of a DNT style system of huts and trails.

Leave a Reply to straight from the den