Posted by Gavin on Nov 24, 2009 in Bothy, Northwest Highlands | 4 Comments
Took a trip to the A’Chuil bothy in Knoydart at the weekend. It’s always nice to meet up with friends and to be reminded of their charming eccentricities.  For instance, within 30 seconds of parking my van at the head of Loch Arkaig on Friday night I was reminded of just how wet one of my friend’s farts always sound. His ass became badly infected in Tibet a few years ago and he has been afflicted with a tremendously flappy ring ever since. 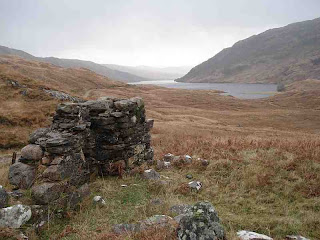 The view east along  Loch Arkaig from the ruined barracks at Strathan. According to the internet they were built after the ’45 Jacobite uprising and occupied for a mere 6 months.
The selectivity of the human memory is a wonderful thing. Unpleasant events and squelchy farts are quickly forgotten. I had been concerned, therefore, at how fresh my impression of the unpleasantness of interminable single track road along the north shore of Loch Arkaig remained, despite the passing of five years since my first encounter with its endless, hilly bends. I timed it on the way out; the 21.7 miles from Strathan to the commando memorial above Spean Bridge (how do you ascertain whether or not a statue is wearing underpants?) took me a full  hour to drive.
The best aspect of the weekend was that it was spent in a data-free oasis, the ramparts of the Knoydart peaks providing a brief respite from the 3G signal and the incessant river of data that flows through our lives. I wouldn’t normally have noticed but I’ve recently joined the 21st century and obtained myself a smartphone. I feel mildly embarassed to be evangelising about a piece of technology that’s been available for so long. I held off getting a normal mobile for some time too, my mind tainted against their benefits by images of yuppies braying into brick sized units with wrist straps and extendable arials. It was the telecommunications equivalent of a bag of smack in the playground – a free bone with 20 quid’s worth of credit – that got me hooked in the end. 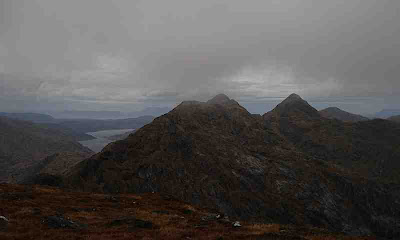 Thankfully the forecast 100 mph gusts didn’t materialise so we got a good day on the hill on saturday before the rain set in. View from Sgurr nan Coireachan towards Garbh Cioch Mhor and the Matterhorn of Knoydart, Sgurr na Ciche. Beyond Loch Nevis you can just make out the Sgurr of Eigg and the Rum Cuillin.
Next week will see me pick up the geological thread thread I started a few weeks back. I’ve arranged to head out with a local expert on saturday, so my next post will be something of a virtual field trip of the  Inverness area.

Leave a Reply to Chris