Posted by Gavin on Dec 7, 2009 in Uncategorized | No Comments
Have you ever become so disenchanted during the dark winter months that you’ve felt the urge to chomp on a dog turd? Me neither, but it does happen. Canine coprophagia is a symptom of perlerorneq, the Inuit name for sickness of life in the dark months. I was introduced to this condition  through Barry Lopez’s engaging account of the social and natural history of the arctic regions, ‘Arctic Dreams’.
It’s pretty dark in here in Inverness at present, but I’ve managed to stave off the urge to scoff any sled-dog’s stools by following through on my earlier threat to use the long evenings to brush up my knowledge of Scotland’s geology and geomorphology.
This week I have been reading the excellent Geographical Society publication ‘Classic landforms of the Assynt and Coigach area’ by Tim Lawson (ISBN 1 84377 017 2). It’s a slim volume but it contains exactly the kind of information that I’ve been looking for; detailed maps showing the movement and extent of the ice sheets during the last (Late Devensian) period of glaciation.

I’d previously assumed that the whole of Scotland was encased in ice during the last ice age, but while reading ‘Hostile Habitats’ earlier in the year I learned about the periglacial trimline. This geomorphological feature – which can be traced on many of the mountains of the Northwest – is a line marking the maximum extent of the last ice sheet. Below the periglacial trimline the rock has been scoured by glaciers; above the periglacial trimline the rock remained exposed and is often heavily frost-shattered as a result. These exposed peaks are known as nunatuks. If you’re lucky enough to have a window seat on a transatlantic flight you may be treated to a view of present day nunatuks poking through the Greenland icecap. The nunatuks of Coigach and Assynt are shown in the figure below. 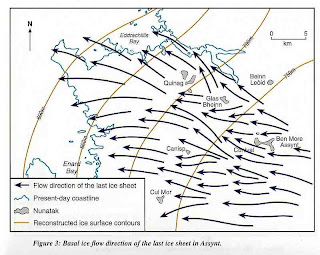 This tremendous little look also contained a diagram showing the extent of the Loch Lomond Readvance glaciers, formed when the climate cooled again about 11,000 years ago. Most of them are where you’d expect glaciers to form, in high north facing coires. One of them, the one near Stronchrubie, just south of Loch Assynt in the map below, seems strangely located. I’m looking forward to examining the site in more detail next time I’m up that way. 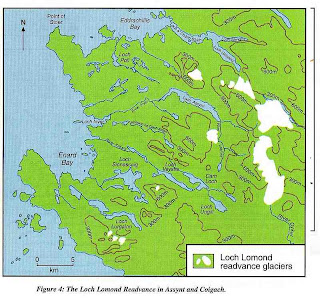 Location of Loch Lomond readvance glaciers in Coigach and Assynt. Reproduced from Classic landforms of the Assynt and Coigach area, Tim Lawson, Geographical Association, 2002
Sadly only three of the eighteen titles in the ‘Classic Landforms’ series deal with Scottish areas (Skye and Loch Lomond being the other Scottish titles). This seems a pretty thin representation for the country  in which the subject of geology was born.

Finally, if, like me, you enjoy a bit of beaver action, have a look at this.