Posted by Gavin on Dec 24, 2009 in Books, Climate, Ski | 4 Comments
Welcome to the Christmas edition of my blog. It certainly feels like Christmas round these parts, we’ve had lying snow for well over a week now. The photo below is of  snow-laden pine and willow. 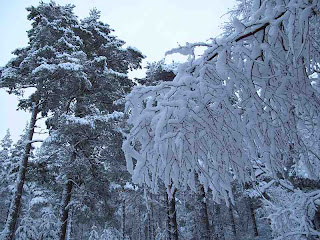 I was very pleased that last week’s post elicited a response from David Mackay, the author of the book  ‘Sustainable energy – without the hot air’. I referred to his book in a previous post in which I declared my general opposition to the development of windfarms in upland areas. I have spent the last week reading the recently published ‘The Wind Farm Scam’ by retired ecologist John Etherington. His fundamental objection to wind energy as currently pursued is that it does little to reduce carbon emissions; because wind is fundamentally unpredictable and intermittent, other sources of power are required to pick up the slack when the wind drops. Wind energy makes a lot of sense if a method of storing the energy generated when the wind was blowing is available; for example as chemical energy in the batteries of electric cars or as potential energy in pumped storage hydro schemes. Feeding the energy into the grid makes much less sense because you need to have backup for when the wind stops blowing. If this backup takes the form of fossil fuel fired power stations then the carbon emission reductions claimed by the wind lobby are drastically reduced; Etherington claims they are reduced to the point that there are no savings.
I agreed with much of what Etherington had to say on the shortcomings of wind energy and found his discussion of the incentives used by government to promote it very illuminating. Unfortunately in the latter portion of the book he devoted a chapter to questioning man made climate change. His central objections were that there is no clear-cut relationship between atmospheric carbon dioxide and global mean temperature in some portions of recent history; that the medival warm period was not preceded by a rise in atmospheric carbon dioxide concentration and that little ice age ended without a rise in atmospheric carbon dioxide concentration. His book would have been stronger had he avoided straying from his area of expertise in this manner.
Predicting the future is never easy – all manner of things other than  carbon dioxide concentration affect the climate. This run of cold weather is consistent with the prediction made earlier in the year that an atmospheric effect known as the North Atlantic Oscillation may serve us up a series of colder than average winters in the coming decade. The sporting opportunities have certainly been first rate this week. The photo below was taken from the summit of Cairngorm on Tuesday, looking westwards. 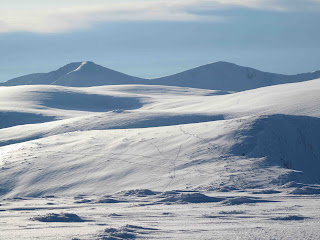 Today I had my first outing on Nordic skis at the excellent but little known Slochd Nordic Ski Centre just south of Inverness on the A9. I’d never tried this lightweight and efficient method of winter travel before but I am now massively inspired to do a bit more. It is far better suited to much of the local terrain – for example  the rolling plateau of the Monadhliath – than heavy alpine touring gear.
All this snow may be great for winter sports enthusiasts, but spare a thought for the animals such as this unfortunate bunny on the trail at Slochd. Before anyone asks I didn’t bring it home to eat.  I have enough turkey and chipolatas to keep me going! 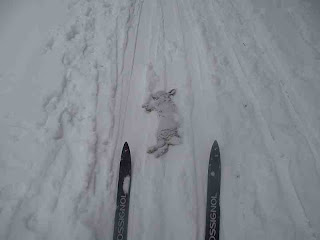