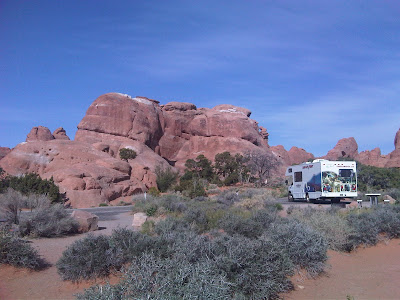 Drinking the Polygamy Porter beer featured in the last post set me wondering about modern Mormons and their views on the practise. As is often the case, no sooner had the question been formed than the answer fell from the book I was reading.

Over 60 % of Utah’s population are Mormons. Polygamy is illegal in Utah, yet there are an estimated 20,000 or so discreet polygamists. They have been excommunicated by the Mormon Church who no longer condone such activities. This amounts to less than 1 % of the state’s population, roughly the same as the proportion of injecting drugs users in Scotland.

Shortly after leaving Capitol Reef we passed near Robbers Roost, the hideout of Butch Cassidy and the Wild Bunch. It is easy to see how he was able to evade the law, for this is remote country even now. We’ve had little contact with civilisation since leaving Las Vegas. So it was something of a shock to arrive in the town of Moab, gateway to Arches and Canyonlands NPs. The town dates back to the days of the old west but and was an important uranium mining centre, a legacy which has left the desert criss crossed with roads and trails that are now used for recreational purposes. Moab is now a mecca for outdoor enthusiasts, kind of the Fort William of Utah. Actually that is a ludicrous comparison.

The presence of so many enthusiasts has led to a tightening of camping regulations. This, combined with the introduction of an online reservation system for most but not all campsites, meant that in order to secure the plum campsite in Devils Garden pictured above we had to get up very early and wade through a deep mire of misinformation. It was well worth the effort, it is easy to escape the crowds even in the hugely popular Arches NP and the country, consisting of red sandstone that has been eroded into magnificent fins, spires and arches with spans of up to 100 m. It reminds me of the Olgas, a companion of Ayers Rock who hasn’t aged so gracefully, but much more of it and with a better view.

Canyonlands next, watch this space.