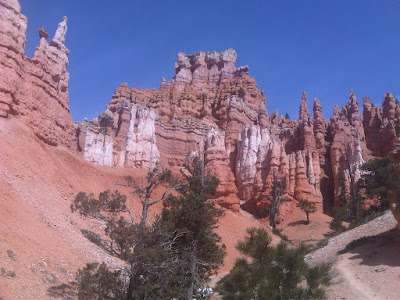 When sitting in one’s everyday rut it’s tempting to think that everything would be better if one could be transported to a tropical beach or some faraway, exotic city. I’m fortunate enough to have visited enough of each to realise that travel isn’t a silver bullet guaranteed to bring contentment or happiness; it’s possible to be euphoric on a rainy day in Slough and jaded and grumpy while watching lions in the Serengheti. In principle at least, I’ve never actually heard of anything approaching euphoria being experienced in Slough. The point is that we project our inner landscapes onto our surroundings.
And so it was with Bryce Canyon. We arrived on Wednesday from Zion after what the presence of a grumpy toddler made seem like quite a long drive. The colours of the famous hoodoo rock formations were washed out by the afternoon sun, the campground was littered with dirty piles of melting snow, when we visited a viewpoint we were crowded by hordes of tourists. I couldn’t muster any enthusiasm for a place that I had flown halfway round the world to see. All I saw was a reflection of my own tiredness and irritability.
Early next morning I made the short climb from the campground onto the rim of the canyon, panting in the thin mountain air. The place captivated me even before I had plunged my cafetiere or seen the first rays to light up the hoodoos, the eroded limestone formations for which Bryce Canyon is famous.
It is difficult to adequately describe the hoodoo without resorting to a technical description of their mechanism of formation, retreating into geological jargon. Nonetheless I will try.
The word describes a rock spire which, rather than tapering to a point or maintaining a uniform girth, has an uneven thickness, bulging in and out like a chess piece or the rear spars of a wooden dining chair. That such geometry is pleasing to the eye is evident from its widespread application in ornamental woodturning. To find oneself within a landscape that is entirely composed of such features is both exhilarating and intoxicating. This description of the hoodoo, though adequate, creates the false impression of the order and symmetry that results from precision lathe work. The hoodoos are organic structures, more akin to a patch of mushrooms than to banisters railings. It is this subtle variation within a repetitive framework that makes them as sublime to the eye as is a perfectly crafted house music track to the ear.
The same satisfying variation is evident in their colouring. A hoodoo that is white at its tip may merge to red in its middle portion and to purple near its base. They rise from aprons of hoodoo fragments, ridges of multicoloured cat litter. The subtle variations of earth tones are as exquisite as those found in the aboriginal rock art of Australia’s Northern Territory. In both cases the framing is as important as the subject matter. In Bryce Canyon the hoodoos are framed between a deep blue high altitude sky and patches of leftover snow. They are garnished with the vivid springtime green of bristlecone pines and bathed in the clear clean light of the southwest. I am glad that I visited in the age of digital photography, I took so many pictures that the developing costs would bankrupt me.
Since leaving Las Vegas I have had no mobile network coverage. This post will be issued when I can scavenge sufficient wifi to unleash it. I’m now in Capitol Reef NP which promises to be even more spectacular that Zion or Bryce!