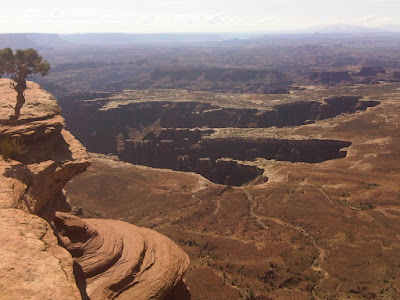 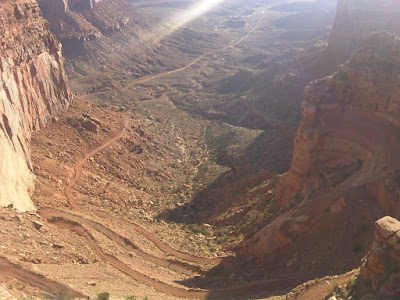 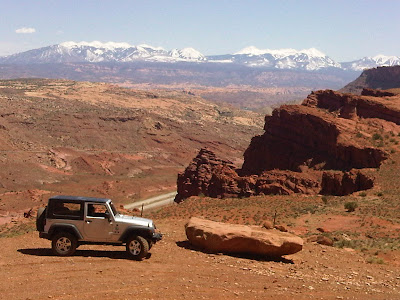 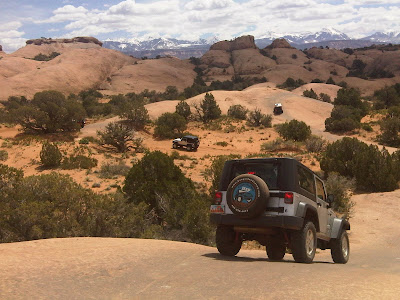 Canyonlands truly is a land of canyons. The first photo was taken from the Island in the Sky, the most accessible region of the park. This is a section of table land connected to the ‘mainland’ by a narrow neck. At the foot of the Island’s cliffs lies another plateau, the White Rim, and into this are cut the great canyons of the mighty Colorado and Green Rivers, the confluence of which lies to the south. Two weeks into this trip through the red rocks of the south west you might think that I would have become hardened, difficult to impress. Yet each of Utah’s parks has been completely different in character and scale and my first peak over the rim into the great wilds of Canyonlands was mindblowing, or perhaps it has merely stretched my mind in preparation for the Grand Canyon?
We’d settled into an easy rhythm of parking up in a national park campground, picking off the easy walks with toddler in tow then sampling some more demanding routes individually, but this approach wouldn’t cut the mustard here. We hired a Jeep and used it to explore the park and some of the surrounding backcountry.
The second picture shows the Schafer trail, a road built to aid uranium mining activity, descending via torturous switchbacks to the White Rim. We drove this and many other similar trails, Long Canyon, Gemini Bridges (picture 3) and the Horsethief road to the Green River, returning at night to our tent and campfire at the Cowboy Camp.
I thoroughly enjoyed this mode of travel and would love to use a jeep to access the more remote regions of the park , but before we returned the jeep we crossed a line. Rather than use the vehicle as a mode of transportation we set out on a specific 4WD route, off-roading purely for the sake of it. This is a very common form of outdoor recreation hereabouts and many trails are multi-use with cyclists, 4 wheelers, dirt bikes and ATVs sharing the same trails. The reason I like mountain biking in Scotland is that it gets me away from motorists. Having a steady stream of buffoons and oafs blasting past would spoil the experience somewhat. When we climbed the 1000 ft from the Green River yesterday after an al fresco riverside dinner I drove past lots of cyclists who had been waiting for the cool shade of evening before starting their ascents. I felt a bit of a Clarkson-esque spoiler as I shot past them, coating their sweaty bald heads with red dust.
This feeling of having descended into a pit of depravity intensified as we revved and roared our way round the 4WD route in the Sand Flats Recreation Area (picture 4), just down the road from the famous Slickrock bike trail. I was surprised to learn that the Slickrock trail was originally a dirtbike route and is still used by them.
I have always viewed those who indulge in offroad driving as their main leisure pursuit with suspicion and disdain. My own dabbling today served to confirm and cement these views. I won’t pretend that I didn’t enjoy pointing my modified jeep up and down seemingly impossible gradients. That is, gradients that would have seemed impossible were it not for the trail markers and the wide strip of rock that had been blackened by the passage of thousands of tyres. This type off off-roading represents all that is worst in modern manufactured ‘extreme’ sports. When one stands back and looks at the big picture I spent fully 3 or 4 hours and covering just over 9 miles. Less than walking pace despite using tens of thousands of pounds worth of machinery a few gallons of unleaded. While the steep slickrock and the fast sandy sections were amusing, there was a lot of unpleasant, bone-jarring bumping over rough ground. I got my fill of that driving tractors in my youth. As paid employment it is tolerable, but as an expensive leisure pursuit?
The jeep has been handed back and we have readied the RV for the return journey to Las Vegas. Tomorrow we head to Monument Valley.