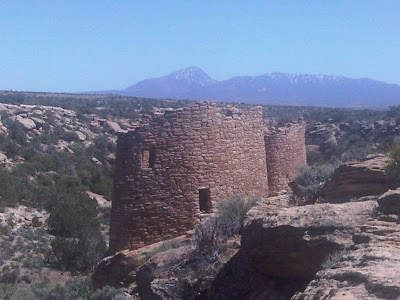 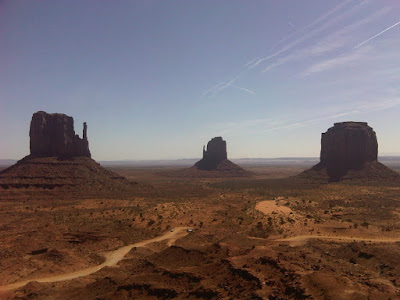 From Moab we travelled south, making good time. This tempted us into detouring to Hovenweep National Monument, home to some ancestral Puebloan ruins. Ancestral Puebloan being the politically correct version of Anasazi, a word that some found offensive because due to its origin as a Navajo word meaning ‘ancestors of the aliens’, the Navajo having settled the area in the late 1500s, long after the zenith of the ancestral Puebloan society and the building of the now-ruined buildings.
The short walk round the canyon upon which the ruins are perched was extremely mellow, as was the nearby campsite. An unexpected gem and a complete contrast to the high octane atmosphere of Moab.
The original plan had been to camp in further down the road in Monument Valley and I’m glad we didn’t. Not that Monument Valley wasn’t spectacular; its red sandstone towers are a sight to behold. We’ve all seen it before though, in books and on TV, and there isn’t much more to it than can be conveyed through a photo. It is also very much the tourist trap with a hotel and gift shop complex built on a low ridge to act as a barricade, hiding the classic view until the appropriate admission charge has been paid to the Navajo owners.
Genuinely spectacular was our next stop, the Navajo National Monument, a large collection of ancestral Puebloan cliff dwellings dating from the same period as Hovenweep, the 1200s. Amusingly enough we saw a couple pushing a small dog in a specifically designed canine pushchair.
In the course of visiting these Puebloan sites I’ve had a misconception corrected. I’d been under the impression that North America was settled comparatively recently, but it was actually at least 11,500 years ago that the first humans crossed the land bridge from Siberia, the sea levels being lower due to the quantity of water locked up in the ice sheets. I assume that what is now the sea bed around Scotland was also well and truly settled during the last ice age, when the ice sheet receded there were probably people waiting to colonise the land from all directions.
This was the biggest day of driving of the trip, thankfully we gained an hour when we crossed from Utah into Arizona. The highlight of the drive was the surreal Painted Desert, like driving through a council grit depot hundreds of square miles in size. The van was lashed by windblown sand throughout. I can’t blame the Navajo for cashing in on Monument Valley because a lot of the rest of their reservation is harsh and inhospitable to say the least.
Tomorrow we’ll be spending the last full day of the trip on the south rim of the Grand Canyon. Should be a fitting climax to what has been an outstanding and inspiring introduction to the American Southwest.