Great Toilets of the World Part 1: Is this Scotland’s only squat toilet?

Posted by Gavin on Apr 6, 2010 in East Highlands, Lavatorial Prose | One Comment 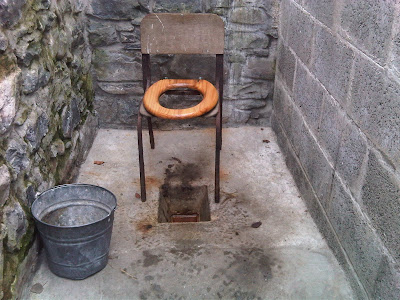 A preference for a hole in the ground style toilet is regarded by most British people as backward and downright uncivilised. I don’t subscribe to this school of lavatorial snobbery however, having recognised the benefits of the squat toilet while travelling in Asia some years ago. It was during this time that I practised and perfected the art of the relaxed squat. It is a sad reflection on the health of our nation that many of us are simply incapable of squatting. This is the first benefit of the hole in the ground toilet; regular squatting promotes hip flexibility, and flexibility is a Good Thing. The second benefit is to the act of stool passage itself. I expect that an appropriate anatomical drawing would highlight the improved alignment of one’s colon with the anus that squatting confers. Try for yourself, your output will slide out smoothly and continuously like a well-oiled piston. I have read that back pain was practically unknown in Thailand until the European chair was introduced. Perhaps a similar tale could be told about haemorroids and western toilets?
Despite my enthusiasm for the squat toilet I do have a regular unit installed in my own home. I have been quite tempted by the hybrid units that one can buy; effectively a standard western toilet but with footplates that permit squatting at seat level. A nasty injury could result were such an elevated squat to be attempted after a few refreshments, so I am inclined against such a compromise.
I occupied myself on saturday with a stroll up Glen Feshie in the Cairngorms and was surprised and delighted in equal measure to find a functional squat toilet in an outbuilding adjacent to the Ruigh-aiteachan bothy. To the best of my knowledge this is the only example in Scotland. As illustrated by the photo above, the simple hole has been complicated unnecessarily by the addition of a seat-less chair and a wooden toilet seat, no doubt to accommodate the inflexibility of the average user. The eagle-eyed amongst you may also have noticed that a misalignment between seat and hole has resulted in some nasty smearage.
It is the inevitability of this type of ad hoc customisation by houseguests and the attendant risk of smearage that puts me off discarding my white porcelain throne. Perhaps a hybrid is the way forward after all.