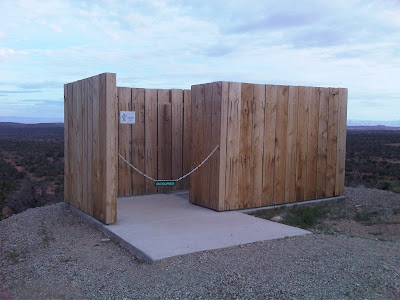 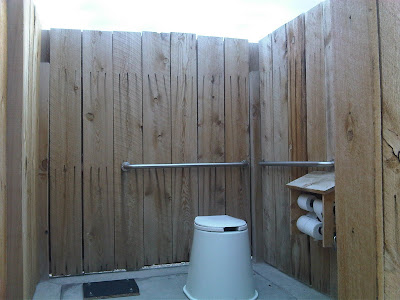 Living it up in the luxury of a house sized RV was getting too much. We needed a weekend off to get back to basics and reconnect with nature, so we threw the tent and an esky in the back of a hired jeep and made a break for the backcountry.
I found the toilet above at Cowboy Camp, just outside Canyonlands NP. We saw real cowboys nearby, with chaps and lassoos. One demonstrated his mastery of the equestrian arts by munching his way through a jumbo sized bag of Lays crisps without dismounting.
The toilet appealed to me as a study in minimalism, an exercise in adequacy. Both door and roof have been deemed unnecessarily luxurious and dispensed with, walls alone being enough to protect the decency of the occupant. The toilet paper was, however, permitted the shelter of a small roof, like that on a bird table, to protect it from occasional desert storms.
The Bureau of Land Management, who administer this and many other similar installations around Moab, do as fine job of keeping stray toleys in check as the cowboys do for steers. Before issuing permits for campsites without doorless dunnies like that discussed above they ensure that campers are packing their own sanitaryware. Paddlers on the Colorado and Green Rivers are obliged to accommodate their turds in their boats, like brown stowaways, for the duration of their trip. Perhaps they have to present them to the rangers at the end as evidence of their compliance in a smelly, twisted kit inspection, laying them out on a sheet as a fisherman would his catch at a village market on the Mekong. A shit inspection even.
Such bountiful provision of outdoor crapperies meant that I was deprived of the opportunity to practise the little known excrement disposal method of smearing, despite finding myself in precisely the unpeopled, arid desert environment for which its use is endorsed. I read of this method in a handbook of alpinism; one simply smears one’s output onto a rock in as thin a layer as possible. The sun then dessicates the jobby into thousands of feacal flakes, very much like goldfish food, which are dispersed to the four winds, leaving the rock clean enough, in principle at least, to eat your dinner off of.