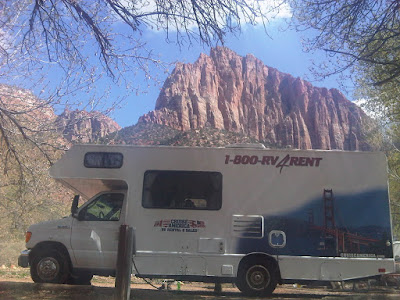 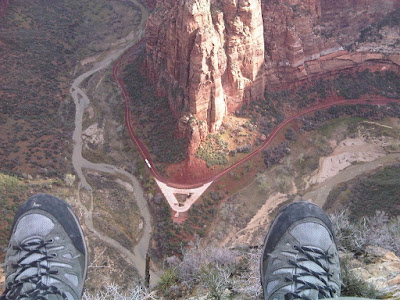 Mobile blogging from Utah’s Zion National Park, basking in the spring sunshine. As you’ll be able to tell from the photo we have hired a modest ‘standard’ RV (recreational vehicle). It may seem obscenely large but most others are much, much bigger.
We flew into Las Vegas, not due to any urge for gambling or other vice, simply because it is the most convenient airport for the delights of the southwest of the USA. One night staying on the ‘strip’ was plenty. Jetlag meant that we retired early, before our hotel’s volcano’s second eruption of the night. A jatlagged 2 year old meant that we took advantage of the 24 hour facilities – we were up for breakfast at 0500 and wandering the quiet and surreal streets shortly after. Groundsmen tended the lavish surrounds of the casinos, leather-faced winos prowled round hoovering abandoned drinks from the street. A few dedicated revellers still wore 3 foot long margharita glasses slung round their necks.
In a seedy parody of Panini football stickers cards with naked ladies in provocative poses lay strewn on the pavement, advertising ‘specials’ for between $35 and $85. One lay half-folded in a pool of partially dried vomit, the top half her body standing free of the pavement, surveying the sordid scene of carrot and margharita residue that surrounded her.
After passing the morning enjoying our hotel’s dolphin pool and big cat enclosure we high-tailed it out of town, careering along roads only just wide enough to take our RV, arriving in Zion after dark. The three days here have been fantastic, the fresh green leaves and wildflowers of spring contrasting with the red and white sandstone cliffs. No big wall action or multiday backpacking on this trip, the highlight has been Erin walking her first mile since her hip operation, from the trailhead at the top of the canyon to the beginning of Zion Narrows. She tells me that she wants to climb the cliffs on her next visit. Think I’ll wait until she’s old enough to lead the hard bits and pull the haul bag.
Tomorrow we’ll be hitting the road to Bryce Canyon NP. 4000 ft of elevation gain will take us from spring back to winter.
The second photo was taken during an early morning raid on Angels Landing. The ridge was exposed enough to be invigorating. The addition of chains made an easy scramble into a hard hike a la Half Dome. I had the summit to myself (apart from a chipmunk) and was glad to be on my way down before the first faffers started to gibber their way up the chains.