Posted by Gavin on Jan 3, 2011 in Books, Northwest Highlands, Walk | 4 Comments
We are blind to much of the wonder of the natural world. The beauty of great nature writing  is that it can open our eyes to this unseen splendour and provide us with the vocabulary needed to describe phenomena which might otherwise pass us by.
In his book ‘Arctic Dreams’ Barry Lopez describes how reflection and refraction of light by ice or water particles in the polar sky can give rise to a variety of arcs and halos. The most spectacular is the sun dog, rainbow patches that appear 22 degrees from the polar sun. You can see from the picture in the link that the sun dogs describe two opposite edges of an incomplete circle. This image shows a complete solar halo. Lopez notes that such features can also be observed in the part of the sky directly opposite the sun and that they are not limited to the polar regions, also being observable in the temperate latitudes. This piqued my curiosity and I have been on the lookout ever since. 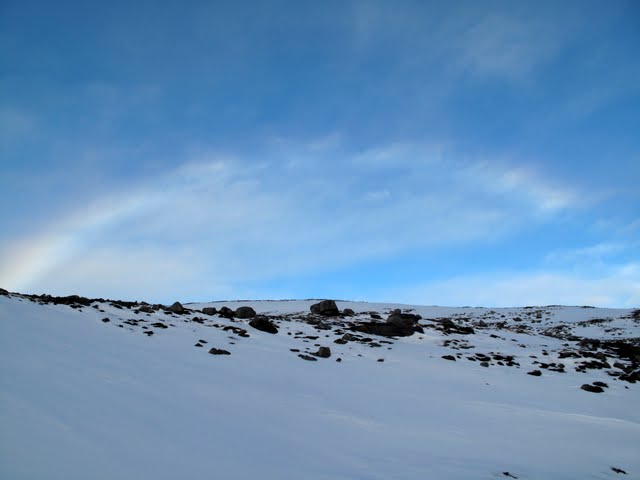 Two days after Christmas I photographed the solar arc above while descending from Cul Mor in Assynt. It is in the sky to the north, directly opposite the late afternoon sun. It’s a pretty subtle effect and would have been easy to miss had I not been primed by reading Lopez’s book.
It was a grand day to be on the hill; still, though not as clear as had been forecast. Some high cloud resulted in the landscape being selectively illuminated by shafts of light, further accentuating landscape features that had already been rendered unusually prominent by a combination of low winter sun and residual snow lying in the gullies and hollows.

To the south, in front of the Fannichs, a curtain of cloud spilled a low ridge. Sgurr Mor is prominent just right of centre.