Posted by Gavin on Aug 10, 2011 in Iceland | One Comment
This is the second instalment of of my recent holiday in Iceland. Read the first here.
We camped near the top of the Hlid campsite. Below us lay a wooden church, around a previous version of which lava flows had miraculously parted during a volcanic eruption in 1729. To the south lake Myvatn with its myriad islands. We were surrounded by volcanic feature, the Hverfell crater. The small peak of Vindbergjarfjall. Behind, its peak obscured by its foothills, a pointed volcano, Hidarfjall. 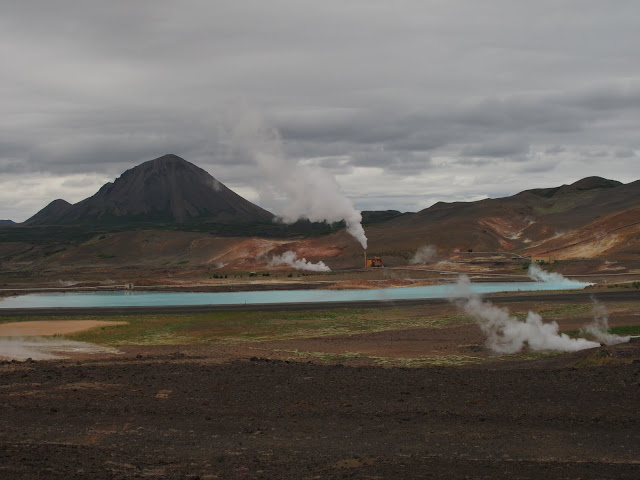 Our drive to the Myvatn Nature Baths took us into an amazing area to the northeast of the lake. The rock was orange, like that at Kerlingfjoll, crossed by crumpled black lava flows. Geothermal vents dotted the landscape, ceaselessly erupting steam. Buckminster Fuller-style geodesic structures were sited beside the vents, adding a touch of Icelandic style. The lakes were a vivid cyan. Icelandic horses grazed incongruously a green field amid the desolation. The overwhelming features were the two roaring steam holes, kicking out more steam than the refinery at Grangemouth accompanied by the noise of many jet engines. 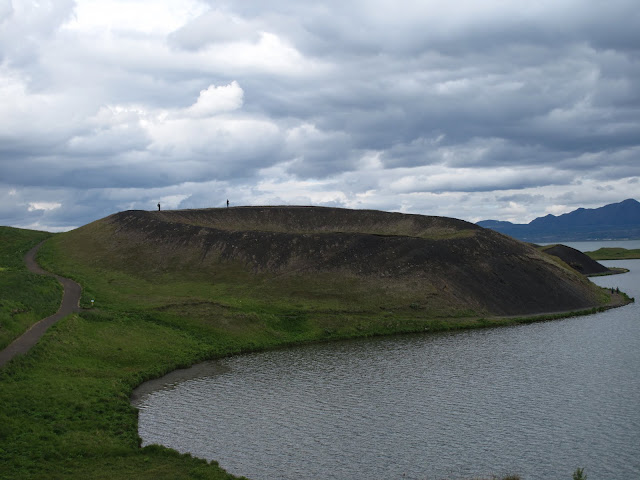 What was described as a pseudo crater on the south side of the lake. 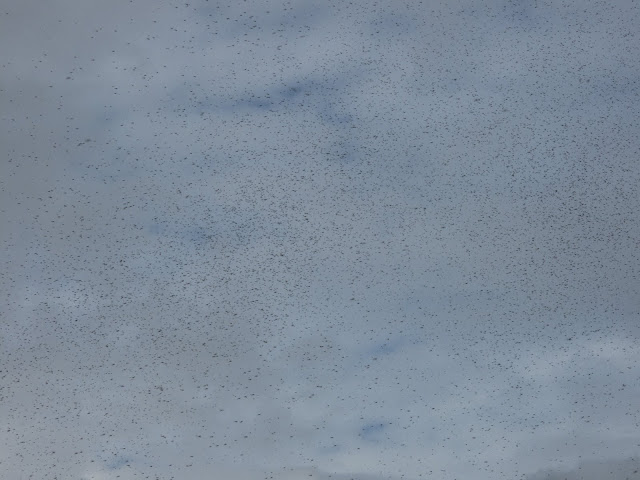 There were one or two flies about. The only time I have seen similarly dense swarms of flies is in a documentary about Lake Victoria. Fortunately they didn’t bite. 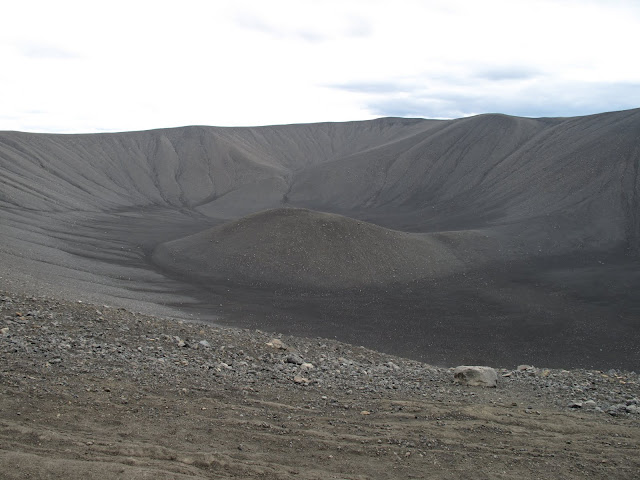 Inside the Hverfjell crater, about 1 km in diameter. The area around Lake Myvatn is truly remarkable and littered with interesting features. It would be easy to spend several days in the area and many people do, making it quite busy by Icelandic standards, but we were inspired to move on, bound for Iceland’s greatest river canyon, Jokulsargjufur, inside which lurks Europe’s most voluminous waterfall, Dettifoss.

Along the way we stopped at another geothermal area. Great vistas, moody skies and an overwhelming aroma of egg. 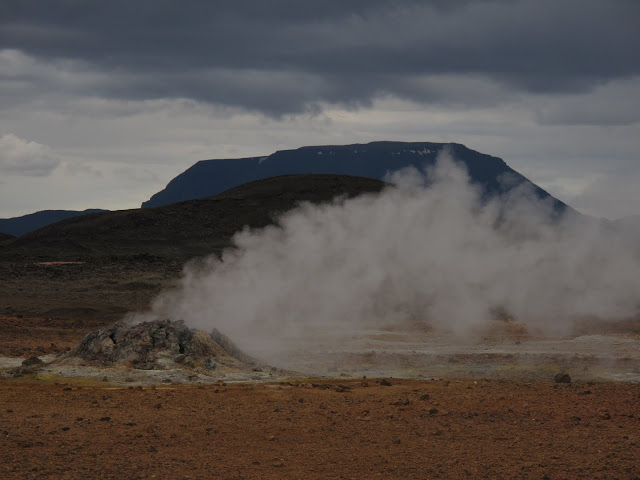 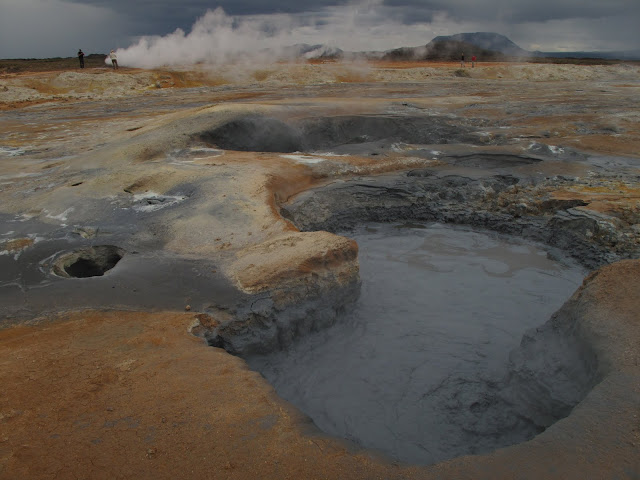 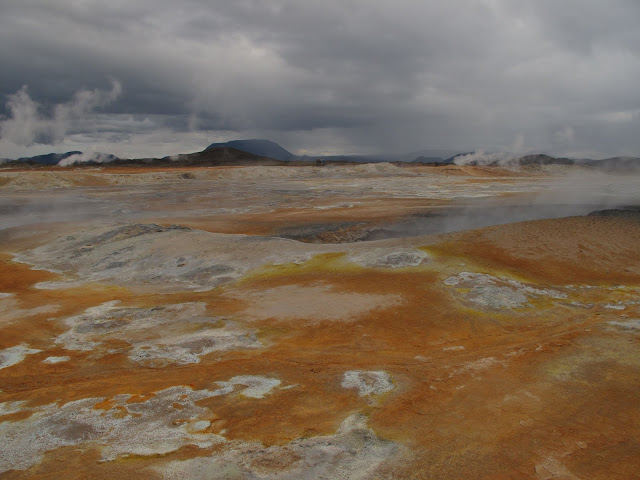 Up until recently road access to the eastern side of Dettifoss has been much easier, but the road up to the west side has recently been upgraded to a decent gravel road. A short walk through an amazing landscape of basalt blocks is required to view the falls, though the spray can been seen billowing out of the canyon for some distance. The fall was mesmerising, a wide curtain of dirty glacial water, thundering into a columnar basalt-lined canyon. Towards its right edge the water hit a protruberance on the way down and against the backdrop of scrolling water it appeared to billow upwards. I could have watched it all day, but it was already late and with Erin fast asleep in the jeep we had to visit the falls one at a time. I cooked up some pasta in the car park while Gaener took her turn – the glamour of life on the road!

A rainbow marked the site as we descended to the Vesturdaler campsite. There were high trees – willow and birch, rose-style basalt formations,  set in an impressive canyon. This quiet and uncrowded campsite was one of the best we found in Iceland. 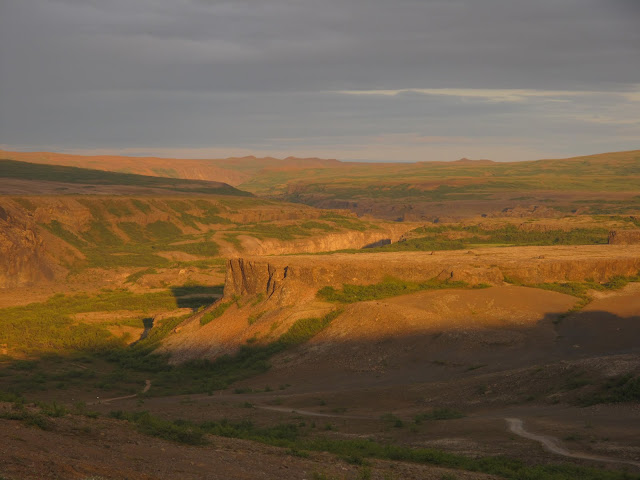 It was a pleasant evening so after erecting the tent we wandered until 2300, which would be midnight in the UK. It was still broad daylight, despite it being the end of July, over a month past the summer solstice. In the north of Scotland we experience this perpetual midsummer light only fleetingly, there is no time to relax into it, by the time one realises it is upon us it is already slipping away.  In the north of Iceland, between 65.5 and 66 degrees north, there is no darkness for months at a stretch, perpetual light becomes the normal condition. It is possible to pack so much into a day, maybe even two days’ worth, enough to make up for the comparable period of complete dark in the winter?