This is the third instalment of my Iceland trip report. Have a read of the first and second if you haven’t already. 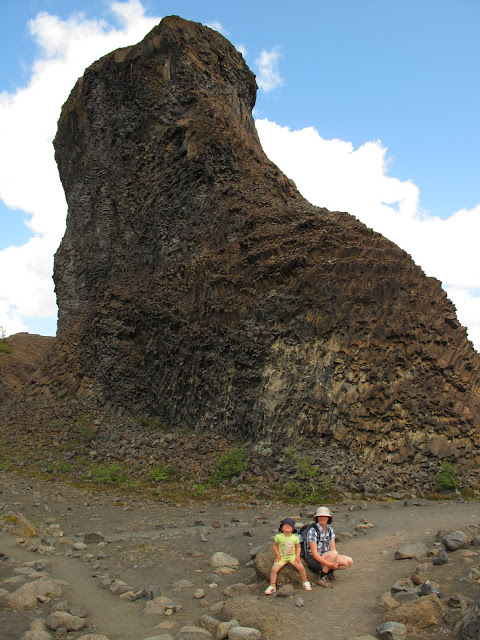 Columnar basalt, the rock found in Fingal’s Cave, the south end of the Isle of Bute and the Giant’s Causeway among other places,  is a common rock in Iceland. It is at its most impressive when seen side on, an array of perfectly, uncannily, parallel columns, as if they have been chiselled into a rock face by master stonemasons. The hexagonal columns form as the rock solidifies from the molten state and are generally about a foot across. They point towards the cooling surface. They are often present as a layer of fifteen metres or so of vertical columns, straddled by layers of similar height in which the columns become strands, radiating out in all directions like the strands of a pompom.

As I wandered round Hljodaklettar I was on top of the pompom, a landscape of irregular hexagonal steps and towering basalt formations overlooking the Jokulsa river canyon. In the canyon below the river flowed against columns of basalt. The rock is so hard as to seem almost impervious to erosive forces. Of course it isn’t: the river undercuts the cliff one pillar at a time, such that the surface is constantly renewed. In places the broken pillars lie jumbled like cigarette ends in an ashtray beneath the cliffs. 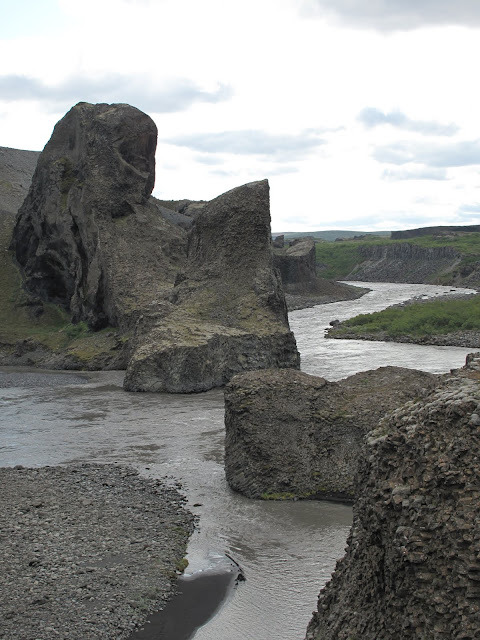 I am a fan of avoiding excessively detailed research prior to a trip. It is no coincidence that best parts of a trip are those that have not been read about or seen in photographs in advance. Indeed it is precisely because they engage the senses spontaneously and unexpectedly that they make such an impression. I think I found Hljodaklettar particularly enjoyable for that reason. I can only imagine how strikingly otherworldly and unnatural such a landscape would seem if seen through eyes unfamiliar with the phenomenon of columnar basalt.

I sought the opinion of the Ranger at Vesturdalur regarding our options for the rest of our trip. She revealed that she was bound for Scotland later in the summer for a coach tour to Orkney, via the Isle of Skye. She was particularly looking forward to seeing the hills purple with heather bloom. I felt drawn back towards the empty interior and was tempted to undertake another traverse. What put me off slightly was that this option would necessitate venturing onto routes not recommended for hire vehicles and undertaking potentially hazardous crossings of glacial rivers. One alternative was to continue round the ring road. Another, more appealing,  route was to head more or less due south down the east side of the canyon to Askja, deep inside the interior. From there we could take an alternative route out to the east to pick up the ring road.

There is a popular 2 day hike from Asbyrgi to Dettifoss, overnighting at the campsite we stayed at at Vesturdalur. This is one of the many things I would like to do on a return trip to Iceland. As it was I decided to run the lower section from Vesturdalur to Asbyrgi. I arranged a rendezvous point with my family and set off, reasoning that the 12 km or so would take me just over an hour. The run was a delight, I saw no-one and had an enjoyable encounter with a gyrfalcon, a bird of prey which circled me for a couple of minutes, occasionally swooping down to harry unseen prey. It called constantly, at first I thought this was for my benefit but it continued after I left. The day heated up rapidly and I was looking forward to a drink as I approached the rendezvous point, more or less on schedule. Unfortunately the rendezvous point was at the bottom of a 100 m cliff and I was at the top! In retrospect this should have been obvious but it wasn’t particularly well represented on my map. This left me with an unexpected additional 10 km – 5 along the clifftops to find a point of weakness at which they could be descended and another 5 back to the RVP. I was certainly ready for that drink by the time I got it. 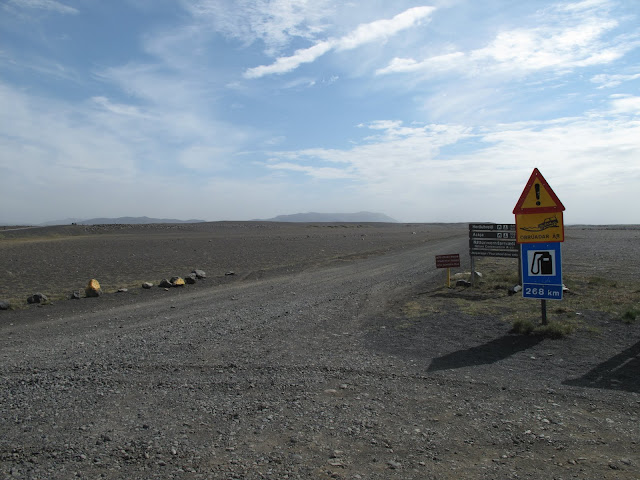 The road to Askja. No fuel for 268 km and bridgeless rivers to ford.

The next section, through the desert to Askja, stood out as a highlight of the trip and one that merits its own post. More to come soon…….