This is the 5th and final instalment of my recent trip to Iceland. After traversing the interior using the Kjolur route and then taking a side trip into Askja it was a pleasure to be on mostly tarmac roads when we popped out of the highlands near the town of Egilsstadir. We were on the opposite side of the island from Keflavik airport and had around 750 km of driving to do to get there. With only 3 days remaining it was clear that the Eastern Fjords and the capital Rekjavik would have to wait for next time. One location that I really wanted to visit was Skaftafjell National Park, so we made haste. We stopped in small fishing town of Djupivogur. The weather had deteriorated and mist hung in the salty air. Come morning we pressed on, pausing in Hofn to purchase supplies and some souvenirs; itchy, tassled hats of Icelandic wool and bags of dried fish. The fish was very enjoyable once it had been accepted that it was dried fish and that it tasted like dried fish. Obviously it was revolting until this acceptance had been reached.

The conditions – and forecast for more of the same – made me fear for the few remaining days of the trip. It was utterly miserable, the cloud was at ground level, obscuring any view. Being outside even briefly was deeply unpleasant. Fortunately conditions improved and the tops were clear by the time we reached Skaftafell.

We woke to warm sunshine and took a stroll down to to the nearby glacier Skaftafellsjokull. This was another highlight of the trip for me, a chance to inspect a glacier that was actively retreating. We walked over various terminal moraines from 1980, 1940 and 1904, noting the increasing vegetation cover. The last was bare, the next had moss and some flowers and the oldest had grasses and dwarf shrubs. I crossed the outflow river to observe the eroded material was being deposited right at the front of the melting glacier. Pointed features were of ice, covered in a thin layer of gravel. Beside the grey ice was a huge upwelling of water from beneath the glacier, indeed most of the flow of the river was originating from this route. It was fascinating to see how the gravel and rock was deposited from the retreating glacier and then sculpted by melting of residual ice lumps and by the meltwater itself into mounds and terraces. Later that day I ran up the hill overlooking the melting glacier’s snout and the penny dropped. I think I really understand now how the Scottish landscape emerged from under the ice. I hadn’t previously appreciated just how dynamic these processes are – the video clip below gives a good idea. 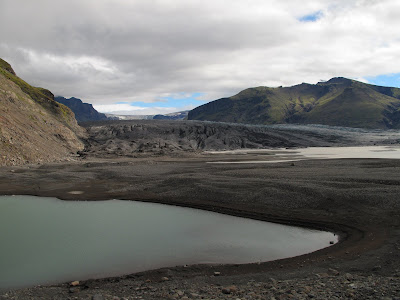 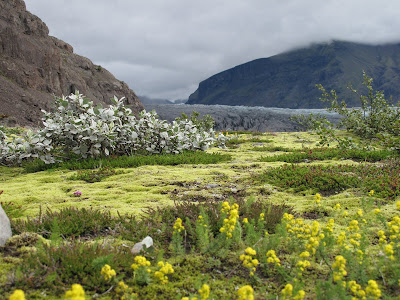 There is a huge amount of eroded material emanating from the various glaciers along the coast and it all ends up in the vast gravel plains that extend from the base of the hills to the sea. Google Earth provides a good sense of their scale.

That’s the end of the trip. I’ve yet to meet anyone who’s been disappointed by Iceland and I am no exception. It’s definitely a place I’ll be back to, but will probably wait until I have a party that are all capable of multi-day backpacking trips. As I mentioned in the first post, with the notable exception of car hire, Iceland isn’t overly expensive, at least to those of us already conditioned by life in Rip-off Britain. You can get a bus pretty much everywhere so next time I’d probably rely on public transport.  Here’s my list of activities I’d like to do when I return.
1. Tour the west, particularly Snaefellsjokull
2. Peak bagging in Kerlingarfjoll
3. The canyon walk to Dettifoss
4. Climb Mt Heroubreid
5. The classic 5 day Laugavegur trek
6. Get a proper vehicle and traverse the interior by the Askja route
7. See a volcano erupting