If you live in Scotland and like wild places with no people it can be tricky to select a suitable holiday destination, for a holiday should supply something completely different – and preferably better than -normal weekend activity. This year we chose a camping trip to Iceland, it turned out to be a fabulous trip to a country full of highly varied and distinctive landscapes.

If you mention Iceland to most people they are sure to mention that it is very expensive. I was pleasantly surprised: fuel is the same price; food prices are more Co-op than Tesco but; campsites are about a tenner. Hardly going to break the bank.  So barring flights a trip to Iceland shouldn’t cost much more than a camping trip at home. Iceland Express have started a summer service from Edinburgh. It is far preferable to Icelandair’s triangular service between Glasgow, Rekjavik and Manchester which requires Glasgow-bound passengers to leave the plane and go through immigration in the land of the whining Manc.

One glaring exception to the general affordability of Iceland is car hire. We hired a modest 4WD which seemed ludicrously expensive, but having been there I can see why, the cars must get trashed pretty quickly. The roads are very basic, even the main ring road has gravel sections and the roads in the interior are ‘F roads’, rough jeep tracks, most with frequent river crossings. When we picked up the car I enquired as to what restrictions there were on where we could go. I wasn’t prepared for the answer – none. A hired 4WD is allowed to travel on any F roads, though some are not recommended and a few river crossings are marked on the map as requiring extra care. As the insurance doesn’t cover river crossings it certainly does make sense to take care.

So here it is, Iceland in words and pictures……… 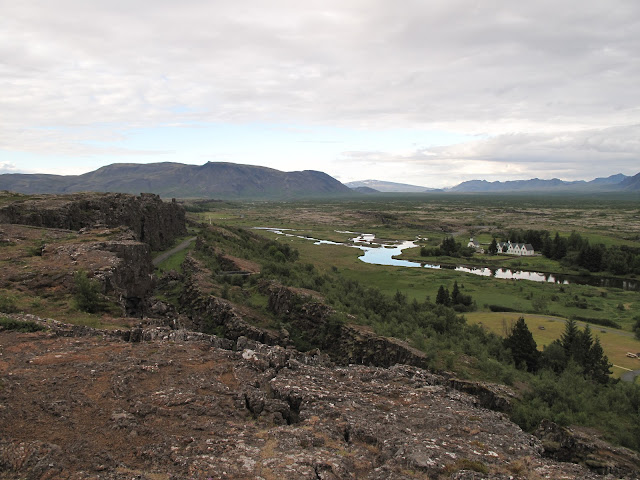 First stop was Thingvellir National Park, site of Iceland’s historic parliament and also the point at which the country is growing. The land to the left is moving towards North America, that to the right is moving towards Europe. In between are great clefts in the ground where the land has split.  It reminded me of the Whangie, a climbing crag outside Glasgow. This is part of the Golden Circle, a series of popular tourist attractions within easy reach of Rekjavik. Enjoyment of these attractions is heavily dependent on the number of German tour buses that rock up at the same time, disgorging teutonic hordes that mob round a bus-Fuhrer who holds aloft the number of their brigade. The independent traveller could easily be crushed under their jackboots, especially on the narrow boardwalks at Thingvellir. 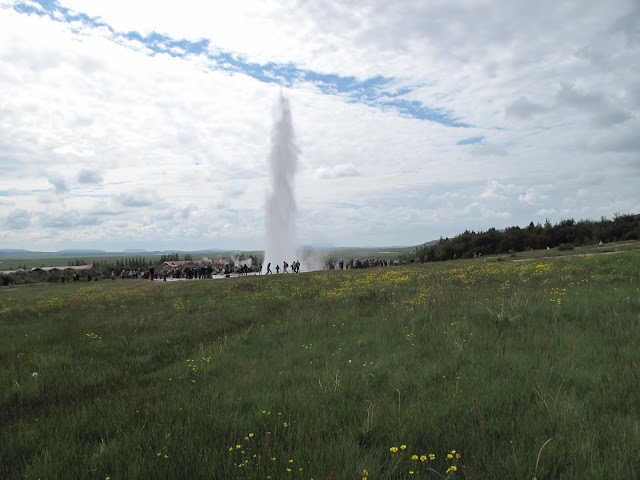 Next up on the Golden Circle was Iceland’s most popular geothermal area, Geysir, where impressive spurtage can be observed every 5 minutes or so. The Germans at the base give a sense of scale. 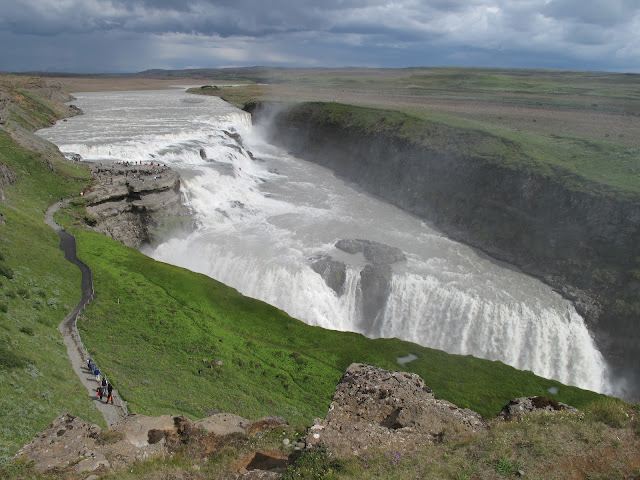 Gullfoss, the last Golden Circle attraction and the first of many impressive waterfalls that we saw during the trip. Towards the end we were blithely driving past waterfalls that I gladly would walk for days to get to were they located anywhere else. Just as the traveller in India can become templed out, in Iceland it is all to easy to become waterfalled out.

Beyond Gullfoss the tarmac runs out and the road becomes the F35, the Kjolur route through the interior highlands, tracing a path through the low relief, glacier scoured, empty land between the Langjokull and Hofsjokull icecaps. All the major rivers on the Kjolur route are bridged and it is popular with cycle tourers. As we passed them I oscillated between thinking that I really didn’t want to ever cycle the route and having a burning urge to come back next year with my bike. One thing is for sure I would bring a mountain bike – many tourers with narrow tyres looked to be having a rather trying time of it as their heavily laden bikes alternated between sinking into gravel and bumping over corrugations or cobble sized rocks. 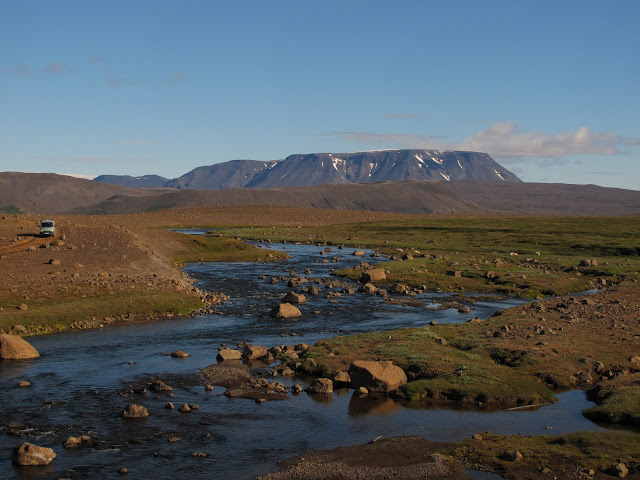 Early morning near the Arbudir hut. The nearby Hvitarnes hut offered better camping but we were deterred by unclear signage and a river crossing that I was unwilling to take on without seeing someone else drive through first. I became emboldened after watching the van that is approaching on the left fording without issue. 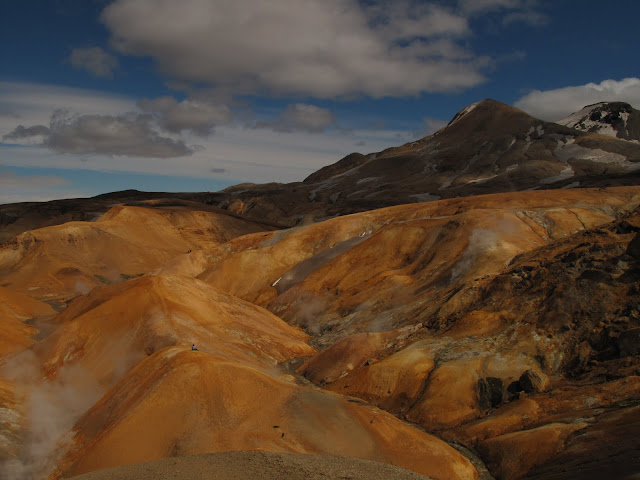 Our next stop was Kerlingarfjoll, a short detour off the F35. So often the most impressive places are those about which nothing is known in advance, places that can be explored and savoured. This geothermal area, a nest of steaming orange ridges, roaring steam vents, furiously boiling pools, all set amid grey glaciated peaks, was such a place. We bathed in a small geothermal pool, breathed the sulpurous air and were in awe of our surroundings. This was an environment unlike any I had seen before. I knew that being there would turn out to be a highlight of the trip, perhaps even a highlight of a lifetime. Amazingly were able to drive to within 20 mins walk of the place, putting it well within the range of 3 year old legs. 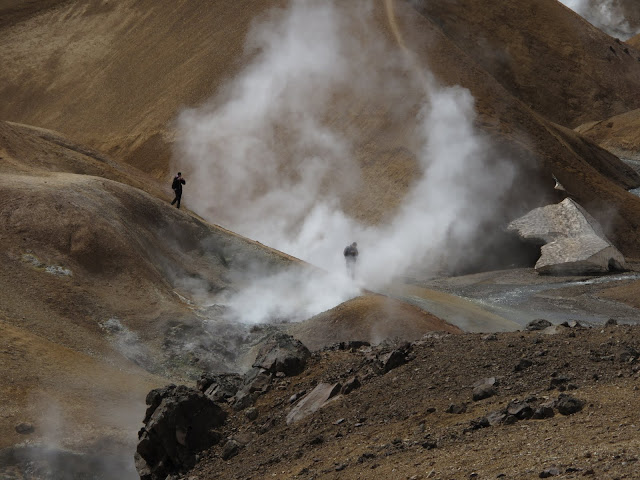 The lack of vegetation brought to mind similarly wild and barren landscapes: Mustang country, in the rain shadow of the Himilaya; Patagonia; the badlands of the American Southwest; the Northern Territory of Australia. In truth these lands are lush in comparison with may parts of Iceland, so bereft of life that blades of grass or patches of moss become noteworthy, even arresting. The semblance of Patagonia was enhanced when I ran up a hill overlooking the campground and surveyed the peaks behind, the vast distant icecaps in front. Dust, one of the defining features of iceland, rose in a plume behind a jeep out on the plains. I vowed to return to explore these mountains more thoroughly. 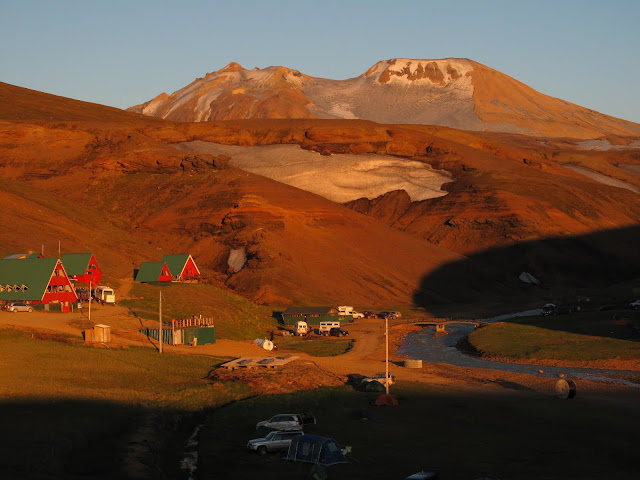 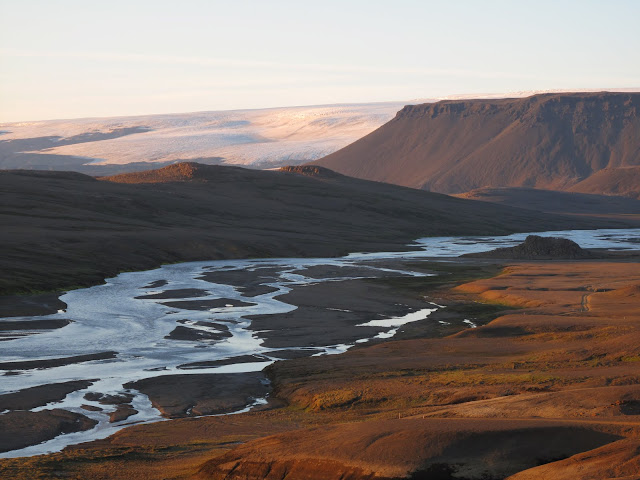 A cycle tourer had been keeping pace with us for three nights. It was clear that we weren’t driving enough. After one night in Kerlingfjoll we packed up and headed off for a long day’s driving, through the highlands to the coast then round the ring road towards our next destination, Lake Myvatn. On the way we saw the delightful geothermal area of Hveraviller with its steaming white pimple. 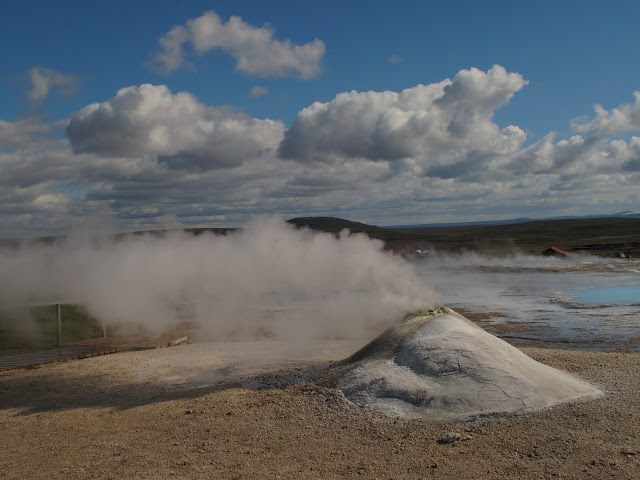 And the mighty Godafoss…….. 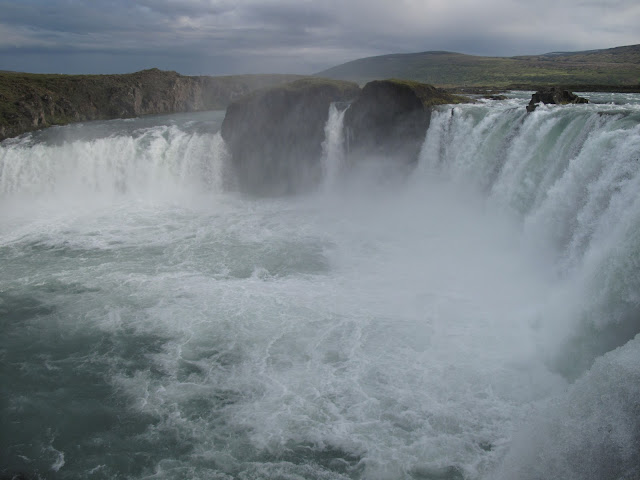 Lake Myvatn translates as Midge Lake so I had my headnet at the ready when we arrived. I mentioned above that dust was, for me, one of the defining features of Iceland. The other is flies. There were flies everywhere, a touch smaller and much slimmer than houseflies. They didn’t bite so were of nuisance value only. After the first night I made like an Ethiopian and stopped resisting, allowing the flies free rein to walk around on my face and buzz in my ears. There were no mosquitos. Even at Midge Lake, in warm, still conditions, after overnight rain, there were no midges. Lots of non-biting flies but not a single midge. Maybe we were lucky, but in those conditions Scotland would be a true midge hell. When it comes to biting insects Scotland really does lead the world. 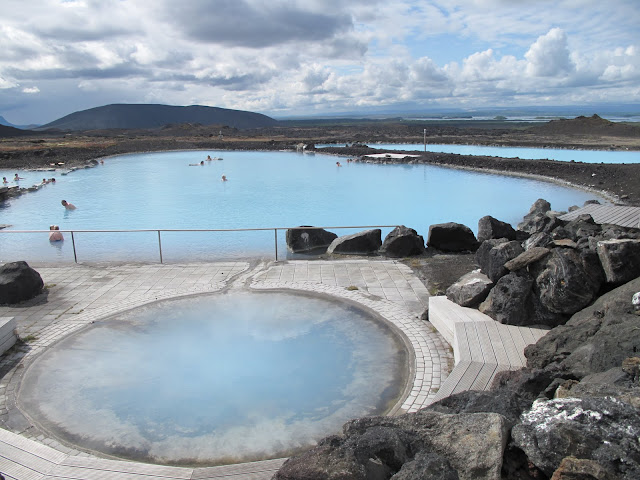 Our first port of call was the Myvatn Nature Baths, a beautifully situated outdoor heated pool that took advantage of water from an adjacent geothermal power station.

That’s enough for one go, more to come.