Posted by Gavin on Oct 18, 2011 in Landscape, West Highlands | One Comment
The Scottish landscape as we know it  – the shape of the hills, the contours of the land, the courses of the rivers – has existed for around 10,000 years, since the ice melted at the end of the last ice age. The urge to interpret the landscape is a core part of the human condition, so we can be reasonably sure that there has been landscape interpretation for as long there have been people on the land.
Inevitably such interpretations will have been  made within the context of the prevailing belief systems of the time. It is only very recently that they have been based on science, that we have been able to say with some degree of certainty how our surroundings came to have their current shape. It is ironic that as our understanding has advanced over the last 150 years or so the world’s increasingly urbanised population has become disengaged from the landscape, disinterested in the answers that science can now provide.
This may have something to do with the complexity of those answers and with the impenetrable jargon in which geomorphology, the science of landscape interpretation, is cloaked. For example when a geomorphologist wishes to convey that an object is curved he describes it as ‘arcuate’; on a recent excursion to the nearby Flemington Eskers my field guide perplexed me by describing the complex of low, braided ridges as ‘anastomosing’.  It was during this outing that I began to wonder what the hunter-gatherers of the mesolithic thought about these striking landforms, how they incorporated them into their creation myths.
I carried these thoughts with me last weekend to one of the few road-accessible parts of the highlands that I hadn’t previously visited, Glen Roy. Glen Roy is famous for its Parallel Roads, distinctive lines that contour round the hillside at heights of 260, 325 and 350 m. They are prominent in the foreground of the image below, taken from the summit of nearby Creag Meagaidh. 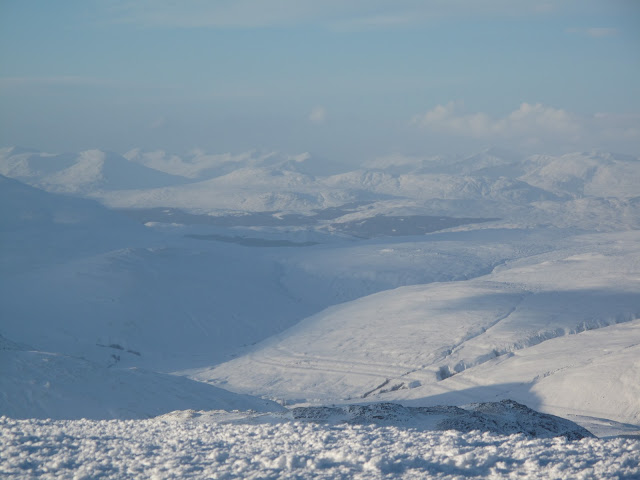 The Parallel Roads are a particularly interesting example,  for a record exists of how they have been interpreted through the ages. In reverse order, stretching back into the mists of time, we have:

In 1840 visiting geologist Louis Agassiz realised that they were were ancient loch shores, formed when the entrance to Glen Roy was dammed by the great valley glaciers of the final stage of the glaciation of Scotland, the Loch Lomond Readvance. During his tour of Scotland Agassiz, who had spent his time prior to that studying glaciers in the Alps, amassed an impressive body of evidence in support of Scotland’s landscape having been sculpted by ice. These were new and controversial ideas and marked the start of the modern science of landscape interpretation.
The position of the shorelines was defined by the height of cols or bealachs over which the trapped water could drain from the ice-bound lakes. As the ice advanced each bealach in turn was blocked, causing the water level to rise until it found another escape route. The first, 260 m road, was the shore of a large loch that extended out into Glen Spean, formed when the westward flow of water was blocked by the Spean Glacier, forcing it to drain eastwards over a bealach near Kinloch Laggan. When the Spean Glacier advanced further, sealing the entrance of Glen Roy, the water level in Glen Roy rose until it reached a col at 325 m, draining into the now isolated 260 m loch in Glen Spean near the Laggan Dam. In due course the advancing glacier reached this bealach too, forcing the loch to extend eastwards up Glen Roy until it reached the 350 m bealach at its head and escaped down the course of the River Spey.
The pseudo-scientific, biblically inspired interpretation
Prior to Agassiz the shorelines had been taken as evidence of elevated sea levels during the biblical flood. Even Charles Darwin, who contributed so much to other areas of science, lent his support to this version of events.
The Celtic interpretation
The Celtic interpretation is one of pure legend, that the roads were created by the warrior Fingal to aid him in his hunting. Fingal, or Fionn mac Cumhaill, was a giant who is also reputed to have built the Giant’s Causeway so there is an inconsistency of scale, it is not clear to me what use these human scale roads would be to a giant.
Beyond the Celtic interpretation
Celtic culture has only been present in Scotland for a tiny fraction the period over which it has been occupied. The millennia of indigenous (Pictish?) landscape interpretation that preceded it would be the most interesting to get into, yet we can only speculate as to what our distant ancestors may have believed. It is tempting to imagine that their views on landscape may have been similar to the Australian Aboriginal Dreamtime tradition of landscape interpretation, a tradition that is still very much alive today and laid out for the visitor in the form of interpretative signs. One example that sticks in my mind are the  Devil’s Marbles, believed to be the eggs of the rainbow serpent. I once visited a cave in the Kakadu National Park in Australia’s Northern Territory in which excavations had revealed evidence of continuous habitation for 40,000 years. The food remains in the archeological record had changed from marine to land-based origin as the sea level had risen and fallen over the years, but it is possible that the culture and beliefs of the people had remained relatively constant,  that the reverence for their land and its mythology-laden landforms felt by modern Aboriginals can trace its roots back through the oral tradition to that of the first Australians, tens of millennia previously. It would be wonderful to gain a similar perspective on Scotland’s landscape, to be able to see it through the eyes of the first humans who colonised it at the end of the Ice Age. But this is nothing more than a delicious fantasy, for such knowledge is most certainly lost. Thankfully we have the modern science of geomorphology to fill the void.