Posted by Gavin on Oct 5, 2011 in Commentary, Travel, USA | 6 Comments
Last week I had the opportunity to travel to the US with work.  My itinerary took me to New Jersey, just outside the great city of New York. This was my first trip to the east coast.  While off duty I sought opportunities to interview the Americans whose paths I crossed, hence this week’s post will be the first example of straight travel writing that this blog has seen for a while.
When the president of the US publicly states that the rich should pay more tax than the poor it can mean one of two things. Either we are poised on the cusp of great change, or Obama’s days are numbered. Indeed both may be true. In any case it is unprecedented, particularly when on our side of the Atlantic Cameron and Osborne are taking the opposite position, keen to scrap the 50 p top rate of tax. Hundreds of protesters are occupying Wall Street, demanding that the rights of the many take precedence over those of business and the very wealthy. Now these ideas are out they will be difficult to contain. If the much feared double-dip recession materialises, I would not be surprised to see civil unrest. All in all these are interesting times.
Some people love to travel on business. I’m not one of them. Living in hotels makes me feel a bit like Alan Partridge and I generally find the experience at least mildly disagreeable. You may ask yourself what is so disagreeable about staying in fancy hotels and eating out on expenses. Well for a start there are the hotels themselves. The hotel I visited on my arrival in the Philadelphia area was a classic of the genre. On walking through the doors I felt immediately oppressed by my surroundings. The high ceilinged lobby was decorated with murals of paintings of hunting and agricultural scenes. A discordant muzak, slightly too loud, lent an edge of menace, jangling my nerves. From behind the doors of the Fox and Hounds Pub (advertised as ‘genial’ on a poster in the lift) came a most unfamiliar noise, the nasal braying of corporate Americans, loaded on alcohol after a meeting or conference of some sort.

My room was located down a seemingly endless corridor with wallpaper so vile I photographed it. Even in my drowsy state I knew that I would never be able to recall it in its true, horrifying detail. The bed was a four poster, overfilling the room. I groped for light switches, eventually realised that I had to reach inside the shades of half a dozen lamps in order to locate fiddly, rotating switches. Eventually the room was bathed in sufficient light for me to establish that there was no minibar. There was nothing for it but to brave the wallpaper and head downstairs to the bar. The noise was such that I expected to find the place packed but there were only around ten people, all roaring at one another across the tables t the tops of their voices. I caught snippets. 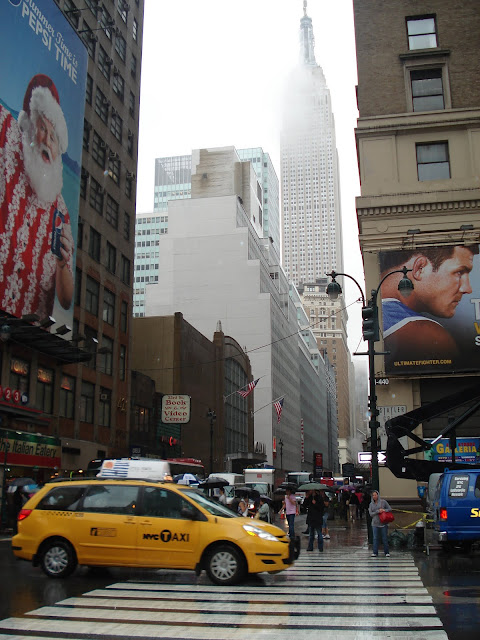 The weather had been unusually wet in the east while drought hit the west. The drought meant a lack of food for bears and there had been a number of attacks in recent weeks as hungry bears sought food in populated areas. Upon exiting Penn Station I found pouring rain, a real monsoon downpour, the likes of which is rarely seen in Scotland. Umbrella salesmen touted their wares. Their time had come, up to four inches of rain were forecast over the weekend.
“Buy an umbrella, stay dry!”
I suddenly remembered a story about someone taking advantage of a downpour to offload a dodgy batch of umbrellas with runny black dye that left the unsuspecting customers looking like wet coal miners.  Anyhow I wasn’t convinced that an umbrella would do much good with the rain bouncing off the pavement. Everyone else had one and once the water started to run down the inside of the arm of my Paramo jacket I began to question the wisdom of my decision. I certainly wasn’t going to buy an umbrella after I was soaked.
An open topped sightseeing bus drove past. At the corners of the top deck were holes designed to let water drain out. It was as if a fireman’s hose had been pointed out each one. The top of the Empire State building was in cloud. I made for Times Square in the hope of finding a suitable window through which to watch the rain and the wet people. Blue Fin, a sushi bar, provided just such a window. Outside I saw a parade of improvised raingear. Umbrellas of all sizes. Ponchos, clear, blue, pink and camouflaged queued for tickets to Broadway shows. Each group of tourists had purchased simultaneously so they looked like teams in uniform. Bedraggled toddlers were pushed past, swaddled in polythene. Despite the rain it was very warm, indeed the impression was tropical, accentuated by a tented village in which an Asian cooking festival was taking place.  Live footage of the cooking was beamed onto huge plasma screens. The stallholders used sticks to drain the accumulated water from the roofs of their tents. This combination of ponchos and sizzling woks brought to mind a tropical downpour I experienced many years ago in Bangkok. For a moment I was caught in a reverie, looking back into the mind of the person that occupied my body thirteen years previously.
Times Square is an appalling and engrossing magnet for humanity, people are drawn there from all over the world. Some are there to see Broadway shows, others, myself included, were there only to see the others. Such an accumulation of life is a spectacle in itself, like the zebra herds in the Masai Mara, like the elver migration in the Sandaig burn, so elegantly captured by Gavin Maxwell, whose biography had filled my empty evenings in faceless hotels. On the plasma screen the chicken was drained from the wok. Surrounding them was a sea of flashing neon Americana; the golden arches, TGI Friday, the Roxy Deli, movie and show billboards. Above the buildings reached higher than I could see. If the fauna of Times Square was engrossing so was the landscape. If the skyscrapers were rock towers they would be genuinely awesome. 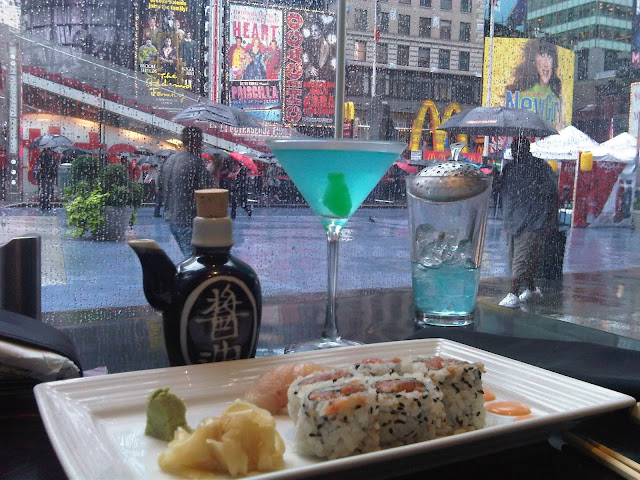 It was still raining and I knew I hadn’t the heart to trudge round Central Park, or to take the subway down to the recently opened memorial at Ground Zero. In any case I had only a couple of hours until my train. Near Penn Station I found a marvelously shabby Irish bar called Blaggards. Some of the letters had fallen off the name and the toilets were in a terrible state of repair. I took a seat at the long bar and ordered a pale ale. A gigantic man with a red and white pinstriped shirt and matching bow tie took the seat beside me. He twisted his waxed moustache as he ordered a beer. He revealed himself to be a banker. Commercial lending, he hadn’t touched any sub-prime mortgages. As the plasma screen in the bar dispensed financial tips explaining how to make money in a falling market the banker told me that he was only a year from retirement and had cashed in all his investments, fully expecting that we would be in full-blown recession a year from now.
The owner of the bar was, unusually for an Irish bar, actually Irish with a broad Dublin accent undiluted by 20 years in the US. I only just managed to decline his offer of a fourth beer before he started pouring it and made my way into Penn Station, aiming to catch the 1809 Dover train. Due to the rain the trains were delayed and I found myself packed into a humid subterranean holding chamber along with hundreds of other commuters. We watched the screen as train after train went from ‘On Time’ to ‘Delayed’. Some went all the way to ‘Cancelled’. I struck up a conversation with a trio of Indians from Chennai and a bespectacled, sallow-faced youth who stood beside me.


Our banter was interrupted by a loud altercation between a tall, bearded thug of a man in his twenties and a middle-aged Asian. The thug had knocked the Asian as he barged through the densely packed crowd. Afterwards he turned and, instead of apologizing, shouted a torrent of abuse and then stared menacingly, at the poor man, who, clearly mortified that several hundred people were witnessing his silent face-off with the thug, stared at his shoes, hoping the floor would swallow him up. The thug moved on and a babble of chatter filled the silence. I was delighted, for angry people shouting at one another in the street was a New York stereotype that I had been hoping to encounter. It could only have been improved if one of the participants had been carrying groceries home from the deli in a handle-less paper bag which had split open during the collision. Or if one of them had pulled a gun. 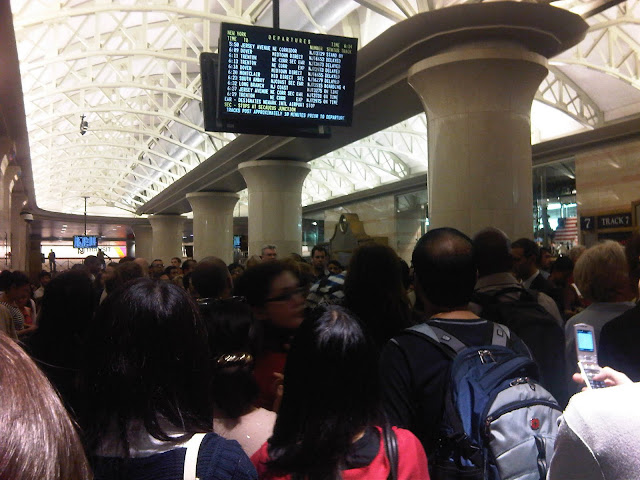 A train arrived and part of the crowd, including the Indians, exited left. They were immediately replaced. I interrogated the sallow-faced youth; after a few beers I fancied myself as something of a Louis Theroux. He was a film student who wanted to direct horror films. He had spent the day doing unpaid work at his church, which owned video equipment that he hoped to make use of in future. He was dismayed that they had made him spend the whole day coiling cables then testing their integrity. His church was St Andrew’s but he was unaware that Andrew was the patron saint of Scotland. I tried in vain to recall what connected this middle eastern apostle to my homeland. Clearly something of an innovator, Andrew had eschewed the standard cross and insisted on being crucified on an X shaped cross.  At some point after this I believe his remains were transported to Scotland and the shape of his cross was incorporated in the national flag.
On the train I sat beside an attractive female student who unsettled me slightly by taking a well-thumbed illustrated bible from her bag and starting to read. On questioning she revealed that she was studying business and theology at a catholic college. She wasn’t religious herself, but she tolerated the theology which was compulsory. Her only interest was in the business part of the course, which she saw as a passport to travel in Europe after graduation. She clearly didn’t want to talk to me and soon managed to get her headphones on.
When I was younger and more naive I made the mistake of thinking that the bond of a common language meant that the UK was more closely aligned with the US than with Europe. I realise now that our values are European, and nothing makes me feel more European than a trip to the US.  It was a relief to get down from the train and retreat into a Scottish enclave, where I spent the rest of the evening and the next day catching up with friends who now live in the US. It is invariably a great pleasure to meet up after a lengthy separation, especially when you find friends apparently unchanged by the passing of a decade.