Alone in the Wild

Posted by Gavin on Sep 13, 2009 in Nature, TV and Film | 2 Comments
Take one man, issue him with a camera, drop him in the midst of grizzly country and leave him there, fretting about the risk of bear attack, for three months. This is the wonderfully simple formula for the Channel 4 series ‘Alone in the Wild’, the first episode of which was broadcast on Thursday night. 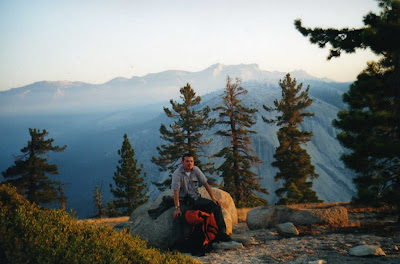 I found it compelling viewing, having experienced this primal bear fear at first hand while backpacking in California’s Yosemite National Park. We had taken dehydrated food in order to minimise the weight of our packs, but my friend Mark was so horrified by the unmistakably vomit-like appearance of our Mexican chicken meal that he refused point-blank to eat it. As darkness descended I harangued him to consume his share, painfully aware that the scent of his uneaten food was wafting through the surrounding forest, acting as a beacon for any bears in the vicinity.

North American National Parks are as full of rules and regulations as they are of bears, and we had been well informed about bear danger. One must not keep any food or other odiferous items in the tent. There was no suggestion that a bear would be interested in food that had already been eaten, so they must be wary of the smell of people. There must, then, be a tipping point at which a bear’s fear of humans is overwhelmed by its desire for food. I expect that a couple of pounds of pork links would do the trick, but what of more minor smells, such as that produced by the Mexican chicken that I had spilled down my front? Would that embolden a bear sufficiently to slash our tent canvas with his sharp claws and make off with my soiled shirt? 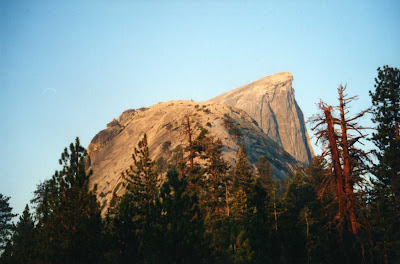 Half Dome from the approach

It was imperative to fill the bear cannister – a black plastic cylinder which the bears, lacking thumbs, are unable to open – and get it away from the camp. Our stuff wouldn’t all fit in the box, so we put our non-food items – bug spray, soap, toothpaste, tobacco – in a stuff sack, which we hung half-heartedly from a puny tree. The unfinished food felt dangerous, like a cartoon bomb with a hissing fuse. We placed it on a boulder in front of the tent, then retired for an uneasy and broken sleep, unexpectedly tormented by bear-related thoughts. During the night I was woken by a loud bang vibrating through the ground. In my dozy stupor I attributed it to falling rocks.

In the morning bear tracks were evident all around. The audacious beast had even deposited a stool 20 feet from our tent. I realised with a start that the bump in the night had been caused by a bear resuming its four-legged stance after plucking our stuff sack from the tree. Gingerly, we followed a trail of chewed possessions until we found the shredded remnants of the bag. Perhaps the brute had been upset by a mouthful of mosquito repellent or tobacco, perhaps he had picked up the scent of our leftover food, every scrap of which had been carefully licked from the bag. 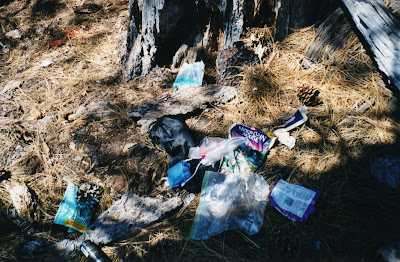 The chap on the programme, Ed Wardle,  recounted a story that a bear expert had told him just before he set out on his Yukon adventure. Two men were camping when a grizzly pulled one of them away, presumably with the intention of eating him. Cocooned in his sleeping bag, he was powerless to resist. Fortunately all ended well, his quick-thinking friend shot the bear dead. Even though my own encounters were with less ferocious black bears I am glad I didn’t know that story at the time. I’m planning another trip to bear country next summer – hopefully by then I will have erased it from my memory! 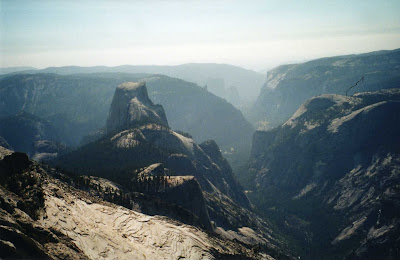 Half Dome from Clouds Rest Summit 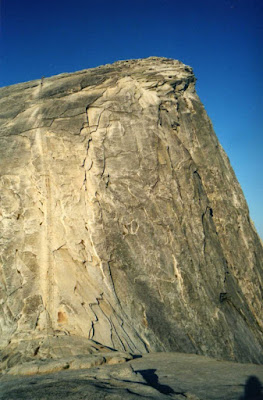 Half Dome. The cable route is visible to the left of the photo. Hikers are (just) visible near the top.