Ski touring in the Swiss Alps: Bernese Oberland via the Jungfraujoch

Posted by Gavin on Sep 19, 2009 in Ski, Switzerland | 2 Comments
The ski mountaineering playground of the Bernese Oberland is hidden from the alpine ski resort of Kleine Scheidegg by the forbidding ramparts of the Eiger, Moench and Jungfrau. The buildings of the Jungfraujoch – Europe’s highest railway station – nestle like turrets or battlements on the ridge that connects the Jungfrau to the Moench. They provide a halfway house between the familiar world of buildings and trees and the unseen realm of the Oberland, with its glaciers and kilometre thick ice, an echo of the Karakoram lurking in the middle of Europe, like a stowaway in a ship’s hold. 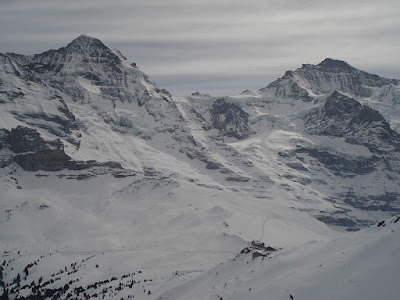 The Jungfraujoch is visible in the col between the Moench and the Jungfrau. Kleine Scheidegg is in the foreground, just right of centre. The Eiger is out of shot to the left.
As we awaited the Jungfraubahn at Kleine Sheidigg, the sun popped into view, perfectly and centrally located in the col between the Eiger and the Moench. All that had been shaded was now bathed in light. As the sun’s rays caressed my face I felt that our timing was auspicious, astronomically perfect, as if we had arrived just in time to catch the light of the solstice illuminating the back wall of a neolithic tomb. 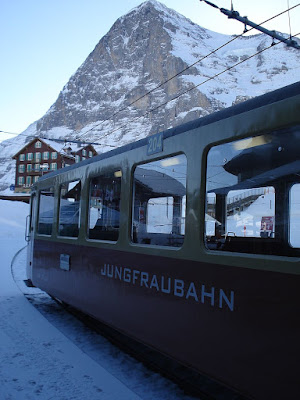 The Jungfraubahn (Eiger railway) with the hotel at Kleine Scheidegg and the Eiger in the background. the train goes through the north face of the Eiger, stopping at windowed galleries en route.
The impeccably situated Konkordia Hut overlooks the Korkordiaplatz, a vast desert of snow-covered glacial ice, radiating legs like a starfish up into the flanks of the surrounding 4000ers. The hut was built perched on a ledge, 70 m above above the kilometre thick ice of the glacier. Now the ice has thinned, increasing the climb to the hut to 120 m. Access up the sheer rock face is provided by a disconcerting metal stairway, of the type found snaking their way up the sides of chemical plants. The only concession made by the ladder builders was the provision of a single banister, always on the outside. Between the inside edge of the stairs and the rock face yawned a disquieting gap. 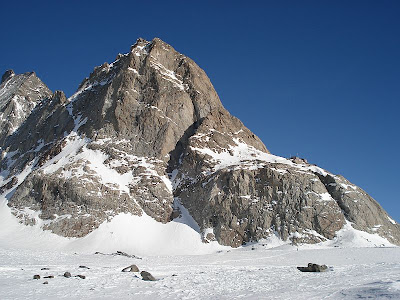 The Konkordia hut is to the right of this photo, above and to the left of the obvious gully that splits the lower face. The infamous hut ladders can be seen zig-zagging up the face to the left of the gully
A shadow danced before us on the snow. Looking up I saw a butterfly flutter overhead, carried from another place and another season, a rare meeting with a fellow life form in these practically deserted hills. What fate for the insect up here in this land of ice and rock? Perhaps it would it traverse the Oberland faster than us, the wind carrying it from winter back into spring. A trio of choughs greeted us like ravens on the summit of Wysnollen; had the butterfly succeeded in running the gauntlet of their yellow beaks? 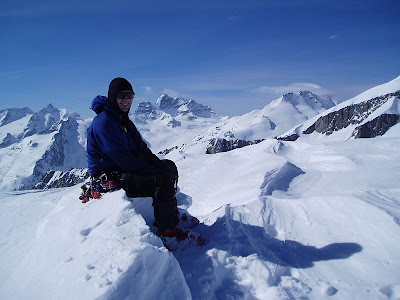 On the summit of Wysnollen
Euphoria engulfed me as I skinned up the Konkordiaplatz. Teams ahead were swallowed by the white desert, dwarfed. The North wind carried a carpet of spindrift across my path. Occasionally a lone spiral pirouetted in front of me. Ten thousand years ago the great Moor of Rannoch may have looked similar to this. If the Konkordiaplatz were to turn to lochan-studded moorland, what would the rest of the world look like? Clouds began to form; a dark shadow below the glacier tricked me into seeing a lochan, into glimpsing the future? 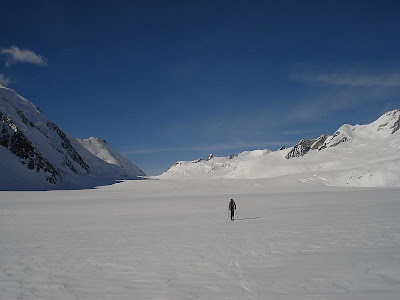