Letting the Cat out of the Bothy Bag

I discovered recently that the Mountain Bothies Association (MBA) has caved in and published a clickable bothy map on their website. Now this information was never secret, but it was previously freely available only to members. A few years back I joined the MBA, obtained the list of bothies and annotated my OS maps with their locations. What I didn’t realise then is that  the MBA list reveals only the tip of the bothy iceberg.

To find out about the privately maintained bothies of which the submerged portion is comprised, aspiring bothiers must serve their apprenticeships. They will slowly discover the true extent of the bothy network through information hoovered from entries in bothy books or drip fed to them by bearded pensioners round the bothy hearth. There cannot be many people who know the location of all the privately maintained open bothies and I would wager that most of those who do would be wary of committing their list to writing. Visiting all the bothies in Scotland is a more appealing challenge to me than that of compleating the Munros. 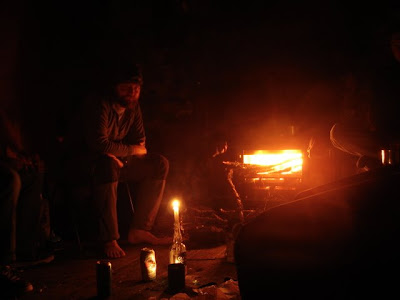 A night round the fire in the reputedly haunted Ben Alder Cottage. If cycling in from the south beware the half-dozen locked gates!

A few weekends back I visited one of these ‘hidden’ bothies. I resisted spilling the beans on my blog, precisely because the place is little known. There are very few references to its existence on the internet and so the chance of passing a quiet night there are high. If I and others were to start dripping this information onto the internet it might be possible for some unprincipled scoundrel to collate it all into a dossier. The publication of such a dossier would remove forever the aura of subversiveness and mystery which is such an attractive aspect of the bothy scene.

This attitude of mine courts accusations of elitism and has a parallel in the moratorium imposed by the Scottish Mountaineering Club (SMC) on the recording of new climbing routes in the Northwest in the 1970s. The stated purpose of the moratorium was to preserve the spirit of exploration for future generations, a strategy that seemed ludicrous to many at the time. The area is now covered by a three volume set of guidebooks, each one bulging with quality routes, yet the remoteness of the Northwest means that even the most popular areas are rarely crowded. Comparing my present attitude to the position formerly held by the SMC makes me feel a shade hypocritical. 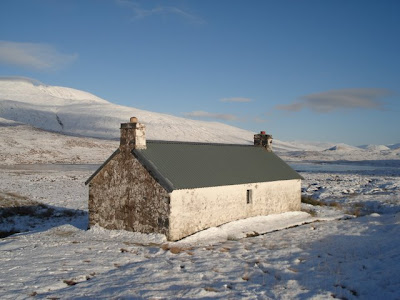 A contender for the most remote bothy in Scotland, Maol Bhuidhe. This building  boasts a rich social history – Iain R Thomson mentions it in both Isolation Shepherd and The Long Horizon. I will recount his anecdotes of the place (and my own) in a future post.

A further chink in the armour of my consistency is revealed by my enjoyment of Dave Brown and Ian Mitchell’s book ‘Mountain Days and Bothy Nights’. This is the only book I have read which accurately captures the spirit of the bothy scene. Reading about others’ experiences made my own more tangible. The book captured the period where a lack of cars led to the sociable outdoor lifestyle of ‘weekending’. I don’t know if bothying is on the way up or the way down – is the bothying life that I know, that of twos and threes, a shadow of its heyday? Might the publication of the MBA bothy locations kick start a renaissance of bothying? If it did, I’m not sure that it would be to my liking – see this previous report of an excessively busy bothy weekend.

Probably my fears are unfounded. ‘Mountain Days and Bothy Nights’ even devoted a chapter to that most prized of hill dwellings, the Secret Howff of Beinn a’Bhuird. The reputation of the howff is such that I knew of its existence long before I knew even of its approximate location. Were it not for a friend who lived for some years in Aberdeen I may never have had the pleasure of passing a night in its cosy confines. In the course of his exile he was indoctrinated into the secret ways of the Aberdonians and learned of the location of the Secret Howff. One night in the Garbh Coire Refuge, high in the Cairngorms, I begged him to reveal its location but he refused. Tradition forbade him from supplying a grid reference, but permitted him to guide me to it at a future date. The Secret Howff has not been ruined by the publicity lavished upon it in Mitchell and Brown’s book, but it is a special case; it blends into its surroundings; there is no telltale square on the map to give the game away. There are even a number of decoy howffs in the surrounding area to put aspiring howff dwellers off the scent. 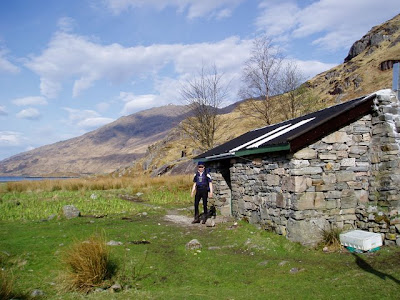 This post has revealed a fundamental contradiction in my attitude to the outdoors. On the one hand I believe that the world would be a better place if more people appreciated our wild places. To this end I am in favour of promoting the outdoors and increasing participation. On the other hand I prize the solitude that is still so readily available in the Scottish hills in general, and in its lesser known bothies and howffs in particular. For now I will desist from publishing the specific locations of lesser-known bothies. Perhaps this is overly cautious; this blog hasn’t yet the circulation required to inundate many bothies simultaneously.

I’d be very interested to hear your views on the subject so please do leave comments below.

Leave a Reply to Erik