Posted by Gavin on Jun 7, 2010 in Northwest Highlands | 2 Comments
Photos:
Top: Eigg and Rum from the Croft Campsite, Arisaig
Middle: The tropical sands of Morar
Bottom: View over Loch Morar to the Cuillin of Skye 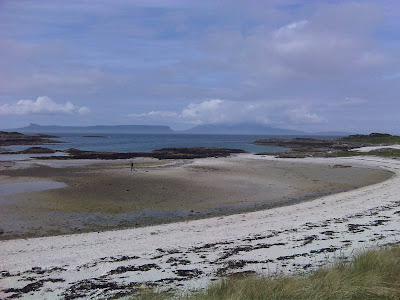 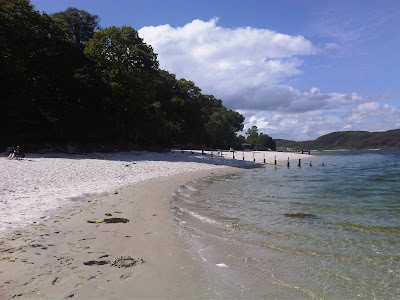 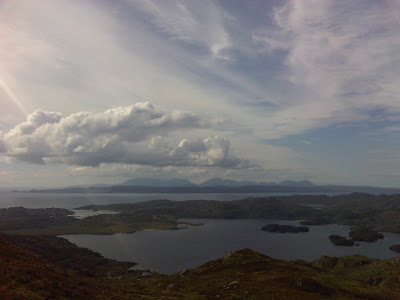 It’s possible that the coastline between Arisaig and Morar has the highest concentration of campsites to be found anywhere in Scotland. I’ve neglected this area until now, only having visited it in passing. This weekend was the time to put that right and we loaded the van and set off for the Croft Campsite. I selected this one based on the online reviews. Two things appealed: lack of shower facilities (keeps the crowds away) and reports of the proprietor’s laid back attitude (nothing worse than an officious warden bothering you while camping). It was indeed a splendid site, a large expanse of flat grass, fine views to the Small Isles and Skye and direct access to the beach. The beach is quite unusual in that it is composed of shingle; ground shells and some quite large fragments of coral. I was dismayed to learn from the campsite owner that many of the coral fragments may be a consequence of commercial clam dredging. No matter where one looks nowadays there is an example to be found of the destruction of beauty in pursuit of profit. Presumably it is elements such as these clam-dredging vandals who are opposed to the establishment of a marine national park off the west coast. Another pertinent example is the recent wildlife crime raid on my near neighbours, the Moy Estate. I have had my eye on them for a while and will be watching the case with interest.
Comparisons are often drawn between the white sands and turquoise sea of the west coast and tropical beaches. Nowhere is this more valid than at Morar. The wind has blown the fine white sand into a satisfyingly steep beach, fringed and shaded by the fresh foilage of springtime trees. It brought to mind Cape Tribulation in tropical north Queensland. Donning my flippers and snorkel I took to the water and swam among spiky towers of brown seaweed. Crabs scurried along the sea bed beneath me. The water was so pleasantly warm that I stayed in long enough to become mildly hypothermic.
Pleasant though it was to lounge on the beach I was not totally at ease. The wild hinterland had been calling to  me from the moment I arrived. Old friends were visible to the west: Beinn Bhuidhe, rising above the  waters of Loch Nevis, unseen but prominent in my consciousness; the pointed summit of Sgurr na Ciche, Matterhorn of Knoydart. Much as I would love to set off into the empty country in this most beautiful season – long days and warm weather, with the summertime  menaces of midge and bracken not yet in full swing – there was no time, or was there?
While perusing my map my eye was drawn to a track which skirted the southern edge of the intriguing plains that link Loch Morar to the coast. I presume them to be a raised beach,  moraines flattened by the action of the sea when its relative level was higher than at present. After 5 km or so on the flat the track cut up onto the hillside, passing near the summit of  Carn a’Mhadaidh-ruaidh (hill of the red fox lair?) before descending to join the main road by Arisaig House. I left my map with my  support crew so they knew where to meet me in 90 mins and set off from Kinloid at a jog. It was only when I reached the end of the flat that I realised the seriousness of my undertaking. The whole enterprise was reliant on the track depicted on my 21 year old map actually being discernible on the ground and leading to the agreed rendezvous point! Fortunately it was for the most part and it did. Some adventurous cyclists had even pushed their bikes over the hill in the recent past though I would not recommend it.
The afternoon was warm and the run a great illustration of the superior endurance of the human being over almost any other animal. The Border Terrier is a hardy dog, bred to follow horses at the hunt, yet I had to stop at every water source to splash him with water to cool him down. What will stick in my mind is the view north over Loch Morar with its wooded islands and sandy beaches, over the sea to the Cuillin of Skye. So many more adventures await in this tiny corner of Scotland alone….
It is spring. Enjoy it.