Keep Off the Grass: A Grand Tour of England 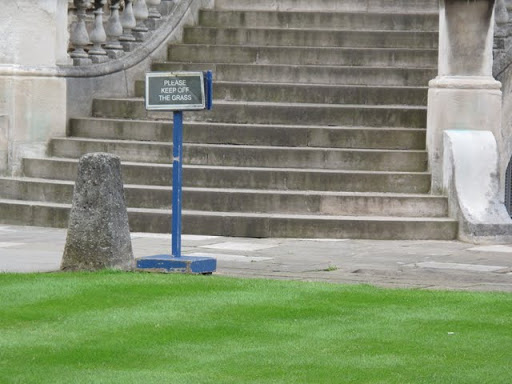 Officious men wearing bowler hats will ensure that you keep off the grass in Oxford, but whose job is it to make sure you don’t stray too far from the footpaths, bridleways and byways of rural England?
During last week’s tour of the south it dawned on me that Ordnance Survey maps provide an unexpected insight into the cultural differences between Scotland and England. South of the border the maps swarm with green lines of varying solidity, each denoting an acceptable route through the countryside. Footpaths, bridleways, restricted and unrestricted byways, long distance routes, ‘other routes’. And then there are the orange lines denoting permissive footpaths and bridleways, on which the right of access may be withdrawn at the whim of the landowner.
It is unclear what sanction awaits the independently minded rambler who leaves his map at home, instead using his aesthetic sensibilities to plot his course through the countryside. Presumably he may find himself in a local magistrate’s court, answering a charge of trespass. I expect that examples might be found where he would be sentenced by the owner of the land on which he trespassed. How quaintly, repressively, medievaly English such a fate would be.
Maps of Scotland – on which such paths, bridleways, routes and byways are conspicuous in their absence – must seem strange and even frightening to the visiting Englishman. How is he to know where it is acceptable to walk? The happy truth is, of course, that the Scottish tradition of free access to the hills – now enshrined in law through Access Legislation – means that one may quite legitimately rampage through the countryside at will. The knowledge that – should the urge possess me – I am at liberty take off in almost any direction contributes greatly to my sense of wellbeing. So accustomed am I to this freedom that England feels constraining, almost claustrophobic.
Oxford – the ultimate destination of my tour of these strange southern lands – elicited genuine feelings of claustrophobia. As one approaches within fifty miles of its famous dreaming spires there is a palpable increase in the level of congestion.  The city has the sense of a museum; its ancient road layout means that there is simply not enough tarmac to accommodate the traffic that crawls angrily through its streets. The constant din of these impotent motors reflects off the limestone walls of the colleges, assaulting the ears of those unaccustomed to this mild form of torture. Much of the city is off limits, hidden behind these fank-like walls, which funnel and corral the city’s infuriating mix of bumbling, bewildered tourists, haughty, plum-mouthed students and impatient, exasperated townspeople through its congested thoroughfares. When I think of Oxford I picture the neat stripes of its immaculately manicured lawns and the simple message of the signs that adorn each and every one of them, ‘Keep Off The Grass’.
I thoroughly enjoyed my tour of the south; climbing on the sandstone crags of Northumberland; visiting family in Durham; walking the North York Moors; meeting old friends at a wedding in Oxford. But it is great to be back home.