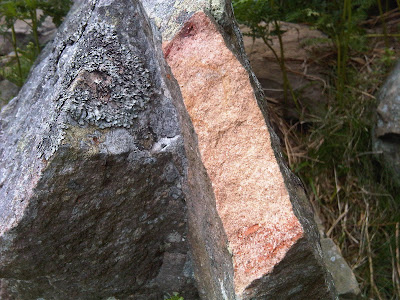 The most memorable aspect of my recent trip to Utah was the vivid colours of the exposed rock, as if they were being illuminated from within with a red light, much as blue light appears to emanate from within the ice of a glacier. So striking are the allsort stripes of Capitol Reef that the Native Americans called it the ‘Land of the Sleeping Rainbow’.

The photo above is of a rock below East Woodward Crag in Northumberland. A corner has been chipped off, revealing the bright pink rock that lurks beneath the dull brown of its weathered, lichenous exterior; as surprising as finding a toad estivating in dry desert earth.

It reminded me of the formerly sooty facades of Glasgow’s sandstone buildings, almost all of which have now been cleaned of their industrial grime. If the same sandblasting treatment were to be applied to the sandstone outcrops of Northumberland, that hibernating rainbow might be reawakened, dazzling the visiting climber with desert hues reminiscent of the American southwest.