Posted by Gavin on Jul 13, 2010 in Commentary, Lavatorial Prose | One Comment 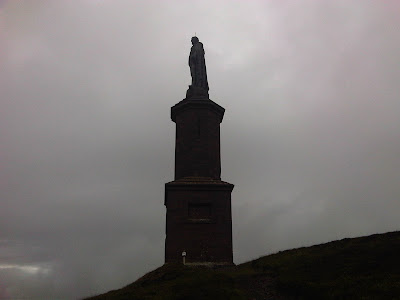 From the village of Golspie Ben Bhraggie appears to be a tiny hill, yet on climbing it I found that it is actually a respectable 1300 ft. It is dwarfed by the whopping 100 ft statue of the Duke of Sutherland that graces (or defaces) its summit. Someone has sprayed ‘Monster’ across the base of the plinth, a reference to the Duke’s role in the Highland Clearances.
A more appropriate tribute to the injustices of the Clearances than this monstrous statue is to be found in the gents toilets of Glasgow’s Lismore pub, where each of the urinals are emblazoned with the names of villains of this period, Patrick Sellar, George Granville and Colonel Fell. A plaque on the wall invites the visitor to pay their respects to these reviled individuals by hosing their names down with pish.
As far as I know this form of memorial is unique. It is surprising that more recent personalities have not been commemorated in this way, Maggie Thatcher being an obvious candidate. Now I think about it an obvious extension would be to glaze a likeness of her face onto the porcelain.
In fact why stop there? Why not enamel a picture of Thatcher’s face on the back of a toilet pan instead? With a traditional toilet one would have to take careful aim in the hope of decorating her face with a skidmark, so one of the perverted Dutch toilets with a raised, waterless inspection platform would be best for this application. It would then be a relatively simple matter to deposit one’s steaming load directly onto the target area.