Posted by Gavin on Jul 5, 2010 in Camp, East Highlands, Walk | 3 Comments
The southern approaches to the Cairngorms have a charm all of their own, the crunch of granite gravel under the mountain bike tyre, camping amid great stands of Scots pine. All in all a more leisurely and dignified experience than rushing towards the ski infrastructure from the Coire Cas car park to the north. 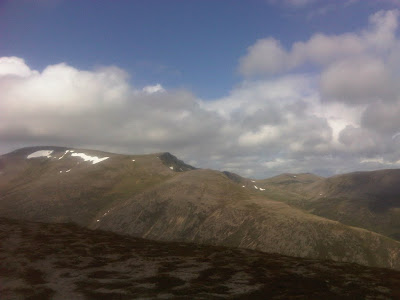 A fresh perspective on a familiar hill. Ben Macdui from Carn A’Mhaim.
Heading east was the only sensible option given the weekend’s weather forecast and what a treat it was, a chance to spend time on some previously unseen country and to catch up with some old friends at the same time. A pleasant change from last weekend’s solo trip, and my first visit to the Cairngorms since the last ski trip of the year in May – it seemed incredible in the cooler days of spring that such as vast quantity of snow would simply melt away, but melt it has in this particularly warm and dry summer. 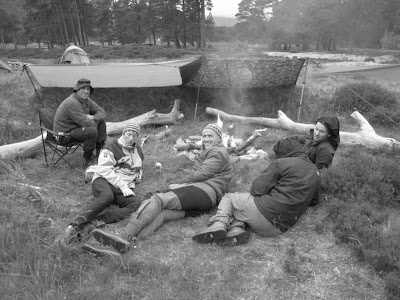 Campsite in Glen Derry, more reminiscent of North America than of Scotland
There is something wonderfully subversive about drinking in the great outdoors, free from the roving eyes of CCTV cameras and the influence of authority figures. When you strip away the commercialism and regulation of city fleshpots – the queues, the curfews, the dress codes, the cover charges – all that remains is a raw, primal drinking experience.
Or so we thought. Imagine our surprise when our camp was visited not once but twice by just such an authority figure, a representative of the National Trust for Scotland, owners of the Mar Lodge Estate. On his first round of the various campsites scattered round the glen he passed on his employer’s objection to campfires. On his second visit, an hour or so later, he was armed – almost unbelievably – with a bright yellow bucket full of special ember-dousing water. It must have been special water for it to have been worth his effort to carry his full bucket several hundred metres from his Landrover, rather than using the water from the burn adjacent to our camp.