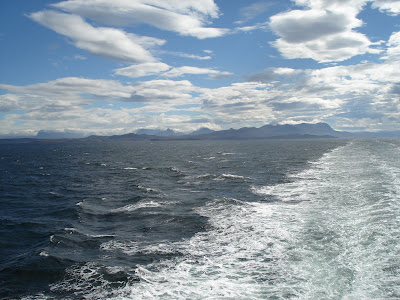 It’s great to watch the mainland receding from the deck of the Ullapool – Stornoway ferry, although I have to admit that such journeys are much more relaxing when sitting in the bar scooping beer rather than refereeing in the children’s soft play area.  We were headed for Uig Sands on the west coast of Lewis, a place that has been calling out to me ever since my last visit in July 2003, having stuck in my  mind as one of the most relaxing and enchanting places I have ever been to.

Uig is approached through the incongrous narrow defile of Gleann Bhalthois. I love landscape features like this narrow, steep-sided glen, that act as passageways between different areas,  in this case linking the  peaty moorland of which much of Lewis is composed to the magical land of Uig. There is just something about the landscape – the brooding grey hills, their profiles aped by the gneiss knolls, dunes and banks of moraine in the foreground;  the beach – really two beaches, the vast sandflats of one remaining substantially unharassed by the turquoise waters other than in spring tides. The bold outcrops of striped pink and grey gneiss that separate the two beaches are doused in sand at each high tide by any Atlantic breakers that make it through the narrow mouth of Camas Uig. 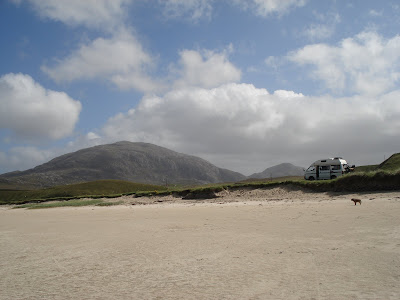 The winds were strong, perhaps gusting up to 70 mph, so I sat in my van, watching the sand snake across the sandflats like spindrift across a mountaintop. The features of snow were there in the sand.In  the wind-scoured areas shells stood aloft like ice nodules, capping tiny pillars of sand. The blown sand accumulated in soft drifts of floury powder. Where the sand had been compacted by footfall it resisted erosion by the wind and reared up, as if fossilised in plaster.

At the both sides of the bay rivers flow down the perimeter, making an island of the sand. Through my slightly rose-tinted shades the water appeared bright purple, like August heather. As my eyes tracked downstream they registered a psychedelic transition through green to bright yellow as my shades augmented the van’s tinted windows.

The cost of camping at Ardoil has doubled since my last visit, to two pounds per person per night. By contrast, the ferry fare has shrunk thanks to the Road Equivalent Tarrif. In 2003 I’m pretty sure it cost at least 250 for a car and two adults,now it’s only 105, much less than even the 1996 price of 154 pounds quoted in the SMC climbing guide. Let’s hope the pilot RET scheme is rolled out to other routes. 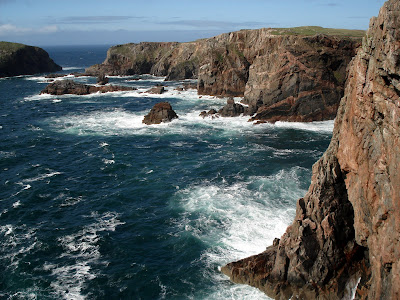 Just down the road are the astounding sea-cliffs of Mangurstadh, without doubt one of the most spectacular pieces of coastal scenery I have seen anywhere in the world – remarkably clean. boiled sweet stripey gneiss, pounded by a pulsating, foaming sea. A fantastic treat awaits for lovers of bothies and howffs, for a local man has built a charming small bothy on the clifftop. Through its spray-dampened window the view blurs to become an oil painting hanging on the wall.

The outer isles never fail to inspire me – check out the post I wrote last year when the Sunday ferries started up, or another more recent one discussing Jonathan Meades’ comments on the island’s built environment.