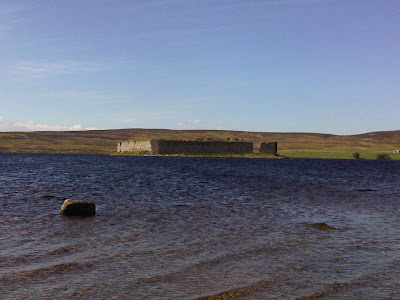 Lochindorb is a sizable body of water on the Dava Moor, to the north of Grantown on Spey. Its most striking feature is Lochindorb Castle, the thick double walls of which are about 20 feet high. The castle completely fills the island, which is around an acre in size.

The castle was one of the residences of the Alexander Stewart, the Wolf of Badenoch, a rather nasty man who controlled the area in the 14th century. It’s hard not to admire the Wolf’s penchant for direct action; his response to being excommunicated from the church on grounds of infidelity was to burn down Elgin Cathedral, along with much of the town. He did the same to the Forres and Pluscarden Abbey, just for good measure. 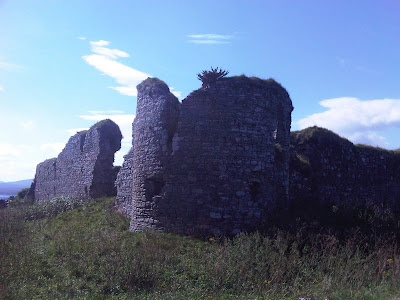 I first became aware of the existence of the castle when out cycling a few years ago and have been keen to inspect it close up ever since, so on Sunday we loaded the car with canoe and picnic basket and set off for Lochindorb. The wind was stronger than I would have liked, but as the crossing is only a few hundred metres and the wind was directly astern I decided to go for it, thinking that if the wind intensified further we could always just let the wind blow us the kilometer or so to the far side of the loch. As is so often the case the wind got up as soon as we left the shore and we arrived at the island amid sizable white-topped waves. 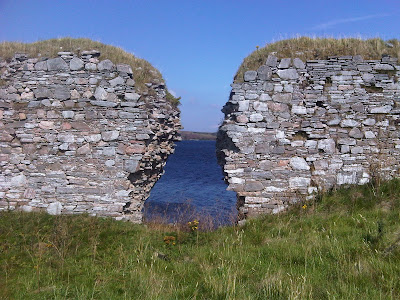 Nervousness about the return crossing did nothing for my appetite – even behind the walls of the castle the gusts were strong enough to cause what MWIS would describe as ‘considerable buffeting’.  I wished that I’d paid more attention to a small book I got for my christmas which describes how to forecast the weather based on the direction of the wind at low and high altitude. This would have given an indication of whether the weather was likely to get better or worse in the near future and would have provided a basis for the deciding whether or not it was worth waiting for the wind to drop.

In the end we did get a slight lull and a bout of decisive paddling saw us back at the car. I wrote some time ago about the dangers of canadian canoeing and to be honest it may have been more sensible to leave that trip for another day, especially as the boat was loaded with dogs and toddlers. My new rule of thumb is that if it’s almost too windy to get the boat off the roof of the car then it’s probably too windy for an enjoyable canoe trip.