Roads from the Isles: The drove roads and old tracks of the North-West coast of Scotland

Posted by Gavin on Sep 29, 2010 in Books, Northwest Highlands | 2 Comments
This post takes its title from a book by D.D.C. Pochin Mould, published in 1950. I have recently purchased a copy second hand and am currently reading my way through. The writer makes the point that, unlike the rest of the UK, the Northwest has many more old, unused routes than it has modern roads. I am fascinated by these direct and logical routes and can feel a great urge building to shoulder my pack and sample them for myself.
The first route that the book discusses is one from Poolewe to Fort Augustus, not a route I have ever considered walking. It was formerly an important route thanks to Poolewe’s role as a port for boats plying the waters of the Minch to the Outer Hebrides. Fort Augustus is the end point of this route, for the book restricts itself to the area north of the great glen, but for the historical walker it would merely have been a staging post en route to Inverness or Fort William by way of the great glen, or over the Corrieyairack to Dalwhinnie. 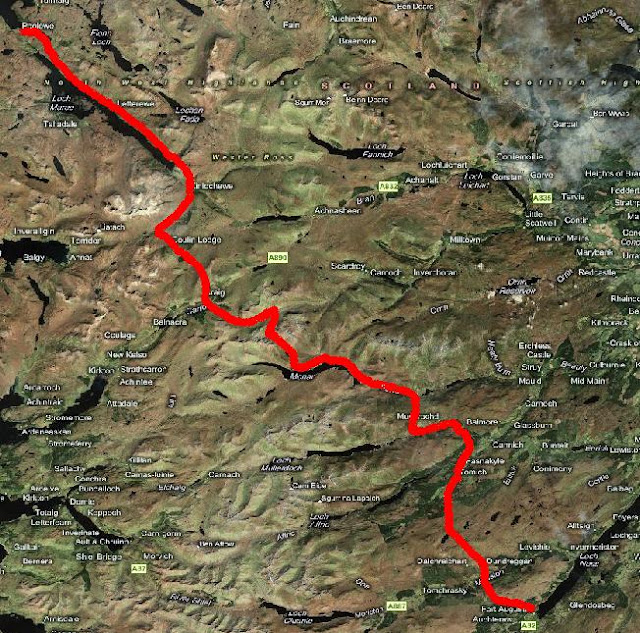 Approximate route of the old track between Poolewe and Fort Augustus


Examination of the image above reveals how direct and aesthetically pleasing the route taken by old track is. Completing the journey using modern roads involves considerable detours: eastwards via Inverness, Garve and Achnasheen; or westwards via Glen Shiel, Attadale and Torridon. One consequence is that the old route avoids roads to a large extent, the only significant sections being between Kinlochewe and Loch Clair and around Glen Affric. This scarcity of tarmac means that it would likely make a highly enjoyable backpacking trip. There are only a few trackless sections with much of the route being on good landrover tracks so I reckon it might even make a decent mountainbike ride.
Writing in the late 1940s, Miss Mould was optimistic about the potential of the first hydro schemes to bring development and hope to the depopulated highlands, yet I feel sadness at the impact of many of these schemes on the environment. When the modern traveler threads his through the Monar hills to the north shore of the loch by way of Strath Mhuilich he is not greeted by the croft house at Strathmore and easy access to the tracks leading west to Kintail. For Strathmore lies beneath the waters of the now dammed Loch Monar, the vastly expanded waters of which necessitate such a lengthy detour that the westward route to Kintail is all but dead; the traveller would be better advised to use the route over the Bealach Bearnais instead.
Another section that has been significantly altered by progress is that which crosses the moor between Glens Affric and Moriston. There is no need now for the cairns that aided Miss Mould’s crossing, for the way is now clearly marked by track and pylon. I am delighted to find that this old track is largely still there to be walked as it has been for centuries, yet the huge changes that it has seen over the last 70 years suggest that it would be best to walk it soon, before it is further despoiled by progress.