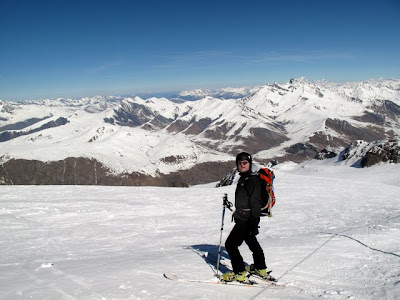 Just back from a long weekend trip to La Grave, a skiing destination with a fearsome reputation and very sparing uplift; a two-stage bubble lift and a single poma.. Pisting is limited to two short blue runs on the glacier at the very top of the mountain, then you’re on your own. What follows depends on who you listen to. There is no shortage of sensationalised accounts stressing the danger and the importance of hiring a guide. However, Pete, who had been previously, described it as being rather more friendly.

The place was rather intimidating at first. The ‘piste map’ doesn’t show much in the way of runs but does show a lot of cliffs and seracs. No obvious ski descent is visible on the mountain, so we were dismayed when Pete fell victim to an underwarm service station tartiflette and was laid low, completely unable to get out of his bed. We primed him with energy drinks and breakfast materials and set off onto the hill in stunning still and sunny alpine conditions. With stable snow and clear visibility Pete’s description was spot on. A mellow day with a sensational ommelette for lunch at the Refuge Chancel. Pete had perked up sufficiently to eat some dinner and we were we were all hopeful of exploring more of the mountain in the morning. 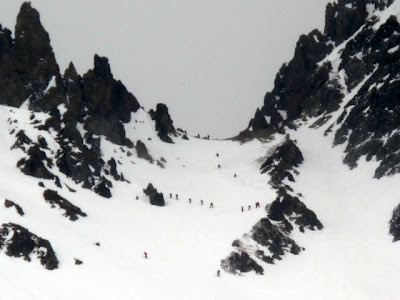 The howling wind outside our hotel room left us in no rush to open the curtains. We’s heard that anything more than a fart is likely to prevent the lift from running and the wind was clearly gusting at least 50 mph at valley level.  More dismayingly still, Pete was still completely wiped out, seemingly now with a flu. We  headed up to the Col du Lautaret for a short but bracing ski tour before the weather closed in completely. The weather was even worse the next day, meaning that no skiing at all got done. Overall a tremendous trip, but more notable for the banter and the food in the Hotel Edelweiss than for the quality of the skiing or the snow. 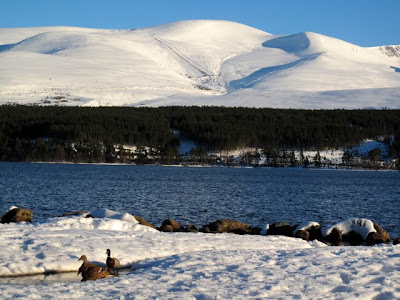 Meanwhile it was lashing down snow in Scotland, reviving a winter that had seemed to be on the wane. Keen to take advantage of a still and sunny day with great snow conditions and also partly to redeem the last day of forced inactivity in La Grave, I  skiied at Cairngorm on Wednesday. Strange but true, Cairngorm outperformed La Grave in all but the catering department! What I need to do next year is get back to La Grave in  conditions as perfect as those I found at Cairngorm!