Posted by Gavin on Jun 17, 2012 in Bike, East Highlands | One Comment
Around a year ago I first wrote about my local hills, the high moors that rise to the southeast of Inverness. At the time I noted that a planning application had been lodged for a wind farm on the Moy Estate. This application has subsequently been approved, not by Highland Council, who ran out of time, but by Richard Dent, the Reporter appointed by the Scottish Government. His report considers the combined impact of the Moy development and the existing nearby development at Farr. It also makes note of further proposals: a practically adjacent development at Daviot (not on the current version of the annually updated SNH wind farm map) and the adjoining proposals to the south at Tom nan Clach and Glenkirk. If the developers get their way this area will soon be dominated by wind farm developments, each individually approved using language similar to that employed in Richard Dent’s report, an example of which I provide below.
‘…….those walking in the vicinity would experience the turbines as dominant visual features. ….. although, on the other hand, it would remain possible to experience vistas in which the wind farm would not be seen. I am therefore not persuaded that the visual impact of the wind farm in recreational terms is unacceptable.’

Unlike Richard Dent, I am persuaded that eventually the combined visual impacts of these various developments will become unacceptable, for I fear that the current applications are the thin end of an unsightly and technologically inappropriate wedge. There are sure to be applications to extend each of them in due course. Unacceptable or not, the train has well and truly left the station and the visual impact of these developments will eventually have to be accepted. Therefore I have decided to devote as much time as possible to enjoying their absence. For some time now I have been poring over my maps and making exploratory forays, keen to find a substantially off-road mountain bike route starting at my house and taking in the Streens Gorge on the River Findhorn. For aesthetic reasons I wanted the route to contain the bare minimum of road riding or pushing. All the ideas I came up with seemed overly contrived, but the penny dropped a few weeks back with the realisation that it is possible, using a combination of a few hundred metres of pushing and a track unmarked on the 1:25,000 OS map, to link the track that climbs over Beinn Bhuidhe Mor with another which leads over the Moy Estate to Ruthven.

The feature in the image above intrigued me, for I have seen similar iron-rich layers elsewhere in the area and have thought that they might have arisen from ash deposits from a distant volcanic eruption. The example above clearly traces the boundary between two different types of gravel, making me think that the iron-rich layer may been formed by precipitation when water that has percolated through the peaty soil above meets the lower gravel layer. Does anyone know the correct explanation? The layer does not appear to be explicitly mentioned in British Geological Society Sheet Memoir 84W. 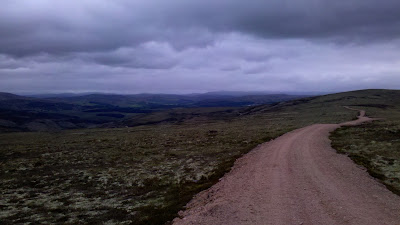 Starting the descent towards Ruthven. The warehouses of the Tomatin Distillery are evident just right of centre.

The terrain brought to mind more exotic landscapes that I have visited abroad; the lichenous tracts of Norway’s Rondane National Park and the open, rounded, ice-milled expanses of Icelandic Highlands. In the interior of Iceland low density beige tephra accumulates in the depressions of a landscape of more dense black volcanic gravel, giving the impression of vegetation where there is none. Here light patches of lichen amid the darker heather create entirely the opposite impression, that of a vegetated desert. The road across the moor is of relatively recently construction and is incongruous despite being built from local rock; no vegetation has yet gained a toe hold in its foot-high smear of crushed red rock.
This is a route best saved for dryish conditions, for the River Findhorn must be forded. I carried crocs with me to protect my feet during the crossings. I did not carry anything other than padded shorts to protect my posterior and during the ride through the gorge, which in all honesty was not much better than cycling across a field, I was worried that I may be inflicting damage on my undercarriage. A scene from Borat kept popping into my head, one where he inadvertently spends the night with a rather fruity gentleman and afterwards makes a statement to the effect that he had had a lovely evening but that his ass had been ruined in the process. Fortunately my concerns proved to be groundless, no ass ruination occurred.
There are a couple of miles of tarmac on the switchbacked climb from Drynachan after which the route cuts west across the moor, with fine views over the firth to Caithness and out west as far as Slioch, then follows the Reirach Burn to hit tarmac once more at Glengeoullie bridge. The tarmac is again shortlived, for after a couple of miles the route cuts into the Assich Forest. I rode out of the forest at Galcantray. There are a couple of routes towards Saddle Hill that would have prolonged my off-road experience but both would have involved some pushing and were not appealing at the end of what had already been a slightly longer than expected day.
So there you have it – an aesthetically pleasing 40 mile mountain bike ride through spectacular, remote and committing terrain, yet accessible from the city of Inverness. My advise is to give it a shot before the construction of the Moy windfarm completely alters the character of the area.